These include wooden slippers worn by Mata Gujri, 'kara' and 'kirpan' of ninth guru 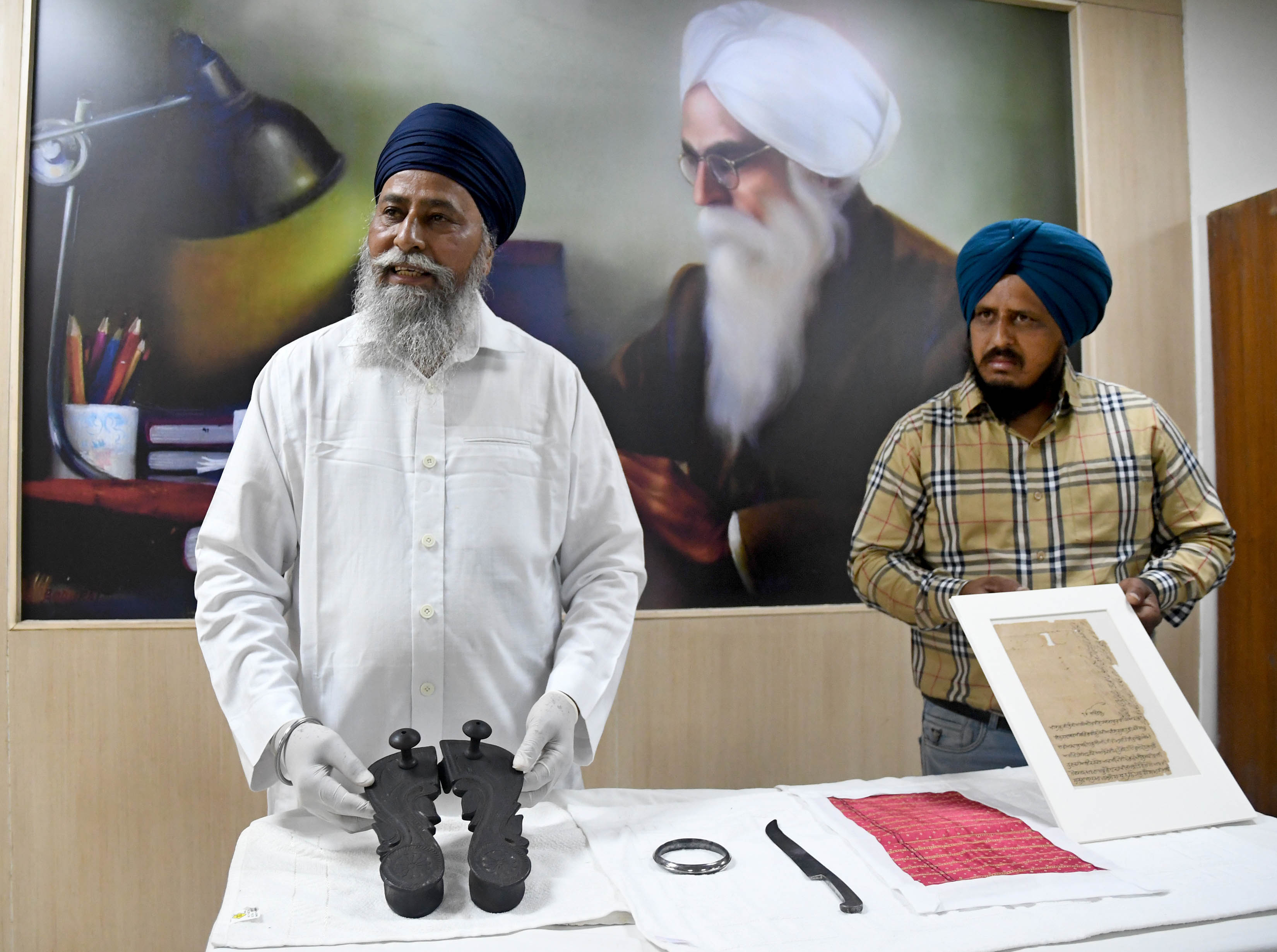 Bhai Buta Singh, the 13th generation descendant of Bhai Rup Chand, a long time associate of Guru Tegh Bahadur, reveals rare relics of the ninth Sikh master, at Bhai Vir Singh Sadan in New Delhi. The relics will be displayed at the Red Fort today as part of the 2-day event being organized by the Union Government to mark the 400th birth anniversary of Guru Tegh Bahadur. Tribune photo: Manas Ranjan Bhui

Hidden from the public eye for years, rare relics of Guru Teg Bahadur will adorn a special segment at the historic Red Fort on Wednesday when the government marks the 400th birth anniversary of the ninth Sikh master over two days.

Holding the relics, which include wooden slippers worn by Guru Teg Bahadur’s wife Mata Gujri while she was carrying Guru Gobind Singh in her womb, are the descendants of Bhai Rup Chand, a long-time associate of the sixth Guru Hargobind until the 10th Guru Gobind Singh.

Based at a village named after Bhai Rupa in Bathinda, Buta Singh unravels his glorious collection of Guru Teg Bahadur’s relics to be displayed tomorrow as part of the exhibition being organised by the National Institute of Punjab Studies, Bhai Vir Singh Sadan, which former PM Manmohan Singh heads.

The relics include a “kara” the ninth master wore; a “kirpan” he carried; a “rumala sahib” (handkerchief) Mata Gujri used; a “hukamnama” (Guru’s order) to Bhai Rup Chand’s family; and a “khadaun” (wooden slippers) of Mata Gujri. The hukamnama bears the original handwriting of Guru Teg Bahadur.

The relics were first located, pictured and conserved through INTACH by the institute, led by its Director, Mohinder Singh.

These have been passed down generation after generation in the Bhai Rup Chand family which also preserves a special carriage the Gurus starting with the fourth master, Guru Ram Das used.

About his ancestors, he says Guru Hargobind had decorated Bhai Rup Chand with the title of Bhai for his service to the Sikh faith.

Also on display tomorrow will be an exhibition on the ninth Guru’s life entitled ‘Dharam di chadar’.

Of special attraction at the Red Fort event tomorrow will be a historic painting of Guru Tegh Bahadur, learnt to have been painted by Ahsaan, the royal painter of Shaista Khan, the Mughal Governor of Bengal at the time and taken to Dhaka.

“It is believed that the painting from Dhaka’s Gurdwara was brought to Kolkata by Lt Gen Jagjit Singh Aurora after the liberation of Bangladesh,” says Mohinder Singh.