Sisters give mouth-to-mouth resuscitation in bid to save mother 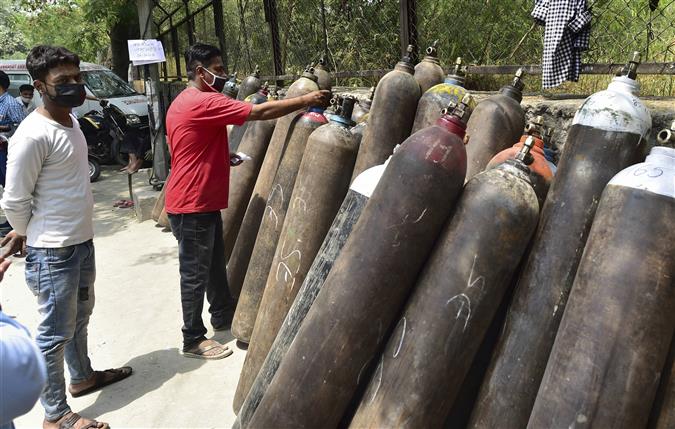 A family member of a COVID-19 patient waits to collect a cylinder containing medical oxygen after refilling, as demand for the gas rises due to spike in coronavirus cases, in New Delhi. PTI

In a desperate bid to infuse life into their mother, who was lying on a stretcher at a government hospital in Uttar Pradesh’s Bahraich district, her two daughters purportedly gave her mouth-to-mouth resuscitation.

The scenes went viral on social media on Saturday and people could be heard in a video complaining about shortage of oxygen and lack of staff.

In the method of artificial respiration, a person breathes into an unconscious patient’s lungs through their mouth to revive her.

Emergency Medical Officer Ahtisam Ali said the woman patient had come in a gasping condition. As soon as a doctor attended her, she died.

“As soon as the video went viral on social media, District Magistrate Shambhu Kumar and senior doctors of the medical college reached to the woman patient and tested her. Maharaj Suheldev Medical College principal AK Sahni on Sunday when the patient was brought to the emergency unit, her family members claimed that she was on death bed.”

“By the time, the doctors could start her treatment, she died,” Sahni said.

“The daughters of the deceased woman were giving her mouth-to-mouth resuscitation as they became emotional.”

He said there was no shortage of oxygen in the medical college. PTI