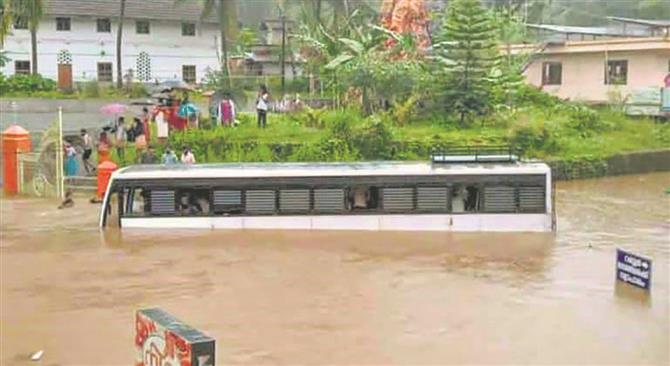 A bus partially submerged in a waterlogged area following heavy rain at Poonjaar in Kottayam. PTI

At least six persons died and a dozen were missing on Saturday as heavy rains pounded south and central Kerala causing flash floods and landslides in many parts, prompting the state government to seek the assistance of the defence forces for rescue operations.

Several people have been injured and displaced in rain-related incidents in the southern state where dams in many districts are nearing its full capacity and small towns and villages in hilly areas are totally cut off from the outside world.

Many hilly areas of Kottayam, Idukki and Pathanamthitta are experiencing almost similar to that of the situation the state faced during the time of devastating floods of 2018 and 2019 but authorities said everything was under control and there was no need for any panic.

However, the rescue teams of the state police and fire force could not reach the affected areas due to floods and adverse weather conditions prevailing there. “The situation is serious,” Chief Minister Pinarayi Vijayan said. Officials said personnel of the Army, Air Force and the Navy were on the way to Koottickal and Peruvanthanam — the two hilly villages falling under Kottayam and Idukki districts respectively — where an overflowing river swept through houses, displacing and isolating many.