A day after he was issued a show-cause notice by the Janata Dal (United) over allegations of corruption in some land dealings, former union minister Ram Chandra Prasad Singh resigned from the party 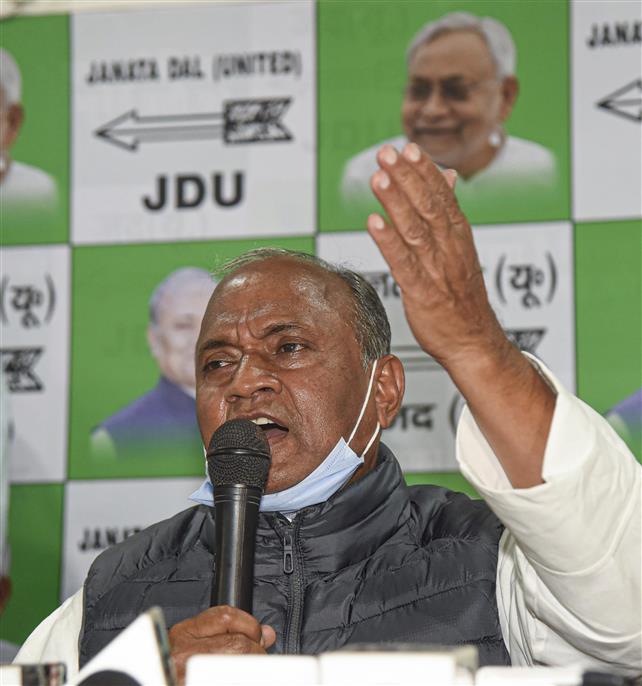 A day after he was issued a show-cause notice by the Janata Dal (United) over allegations of corruption, former union minister Ram Chandra Prasad Singh today resigned from the party, slamming his political mentor Nitish Kumar.

Amid a raging buzz of “a major political shift/change in Bihar soon”, the JD-U on Saturday issued the notice to Singh, the former Steel Minister in the Narendra Modi Cabinet, over “discrepancies in immovable properties”, seeking a reply at the earliest.

Sources said Chief Minister Nitish Kumar, who was “unhappy with Singh ever since he joined the central government without his consent”, wanted to highlight the “corruption case against his own party member to prove his stance regarding the raging issue of ED raids against opposition leaders”.

Known to spring a surprise or two, Nitish Kumar is planning “something major in the Bihar political scene” they also added.

Meanwhile, saying that “there’s no cure to jealousy”, Singh claimed “conspiracy” against him “because he become union minister”.

“Nitish Kumar will not become Prime Minister in any of his seven lives,” he was quoted as saying, describing the JD-U as a “sinking ship”.

Notably, the show-case notice, while hailing Nitish Kumar for having “zero tolerance policy for corruption”, stated: “A complaint has been received with evidence from two associates of Nalanda District Janata Dal (U), in which it was mentioned that discrepancies in immovable properties registered from 2013-2022 in his name (RCP Singh) and that of his family were noticed.

“As directed, the party expects you to immediately submit a reply about your clear opinion point by point on the points of complaint”.

A former Uttar Pradesh cadre IAS officer, Singh came close to Nitish Kumar while on central deputation and was said to have the biggest hold over the party after Nitish Kumar.

Apparently, Singh was deputed by Nitish Kumar to hold talks with the BJP on the issue of ministerial berths for the JD-U. Instead, he landed himself a ministerial position “without consulting the leadership”, laying the beginning of differences with Nitish Kumar.

When the time came for filing nomination for the Rajya Sabha earlier this year, Nitish Kumar decided not to send JD-U’s lone Union minister back to the Rajya Sabha for a third consecutive term.