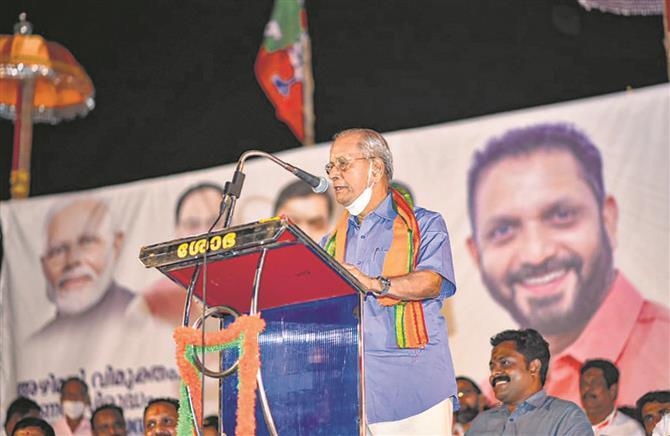 Kerala has given the BJP its biggest setback in the 2021 Assembly elections. The party lost the sole seat, Nemom, it had won for the first time in the southern state in 2016. CPM’s V Sivankutty defeated senior leader Kummanam Rajasekharan, who had resigned from the post of the Meghalaya Governor in March 2019 to give electoral politics a shot.

Despite a high-decibel campaign revolving around Sabarimala Temple, religious sentiments, love jihad and gold smuggling scam, the BJP not only lost the vote share, but its top candidates, including state chief K Surendran and ‘Metro Man’ E Sreedharan, too failed to make a mark.

Buoyed by Nemom, the party tried to amplify gains, playing up the controversy over the Sabrimala Temple. The 2021 elections saw top leaders repeatedly invoking traditional BJP issues of love jihad and the Sabarimala Temple to attack the ruling CPI(M).

While BJP leaders blame “tactical voting by Muslims”, observers say CM Pinarayi Vijayam, along with his able Covid management, “corrected stance on Sabrimala” to pull off what no other party could do in Kerala for a long time. Meanwhile, a divided BJP house, it seems, further added to his benefit.