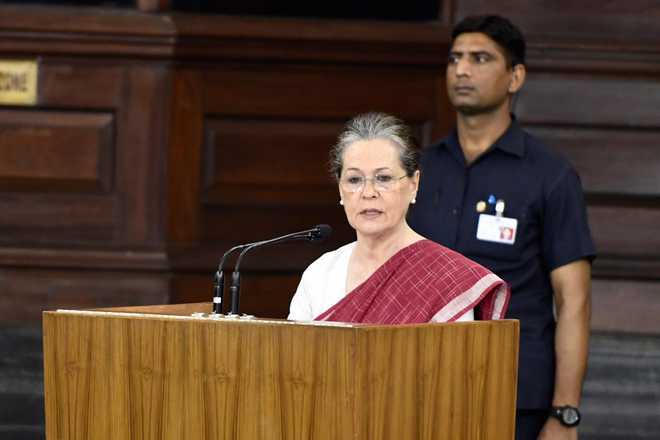 Writing to the PM a day after latter called her on the phone to discuss the COVID-19 situation in the country, Gandhi also said the Central Vista project coming up at a cost of Rs 20,000 crore should be suspended.

This is not the time for extravagance, she told the PM adding that the existing Parliament building can serve its purpose.

Sonia gave five suggestions to the Government including banning all non-urgent foreign trips by government leaders and bureaucrats.

Supporting the government decision to cut salaries of MPs by 30 per cent, Gandhi said, “Austerity measures which can be used to divert much-needed funds to the fight against Covid-19 are the need of the hour.

In this spirit, I am writing to offer five concrete suggestions.

Gandhi said “Impose a complete ban on media advertisements - television, print and online - by the Government and Public Sectors Undertakings for two years and issue only Covid-19 related advisories.”

“Such an outlay seems self-indulgent at this time to say the least. There is no urgent requirement that cannot be postponed until this crisis is contained. This sum could instead be allocated towards constructing new hospital infrastructure and diagnostics along with equipping our frontline workers with Personal Protection Equipment and better facilities, she said.

Congress chief also said the PM should order a proportionate reduction of 30 per cent in the expenditure budget (other than salaries, pensions and central sector schemes) for the Government of India as well.

This would save the government Rs 2.5 lakh crores per year approximately.

“Money saved can then be allocated towards establishing an economic safety net for migrant workers, labourers, farmers, MSMEs and those in the unorganised sector, Gandhi suggested.

She said all foreign visits, including that of the President, the Prime Minister, Union Ministers, Chief Ministers, State Ministers and Bureaucrats must be put on hold in a similar fashion with exceptions in case of special emergency.

This, she said, would bring money as Rs 393 crores were spent for just the Prime Minister and Union Cabinet’s trips in the last five years.

Lastly, she asked all the money of PM Cares’ fund should be transferred to the Prime Ministers National Relief Fund for transparency and efficient use.