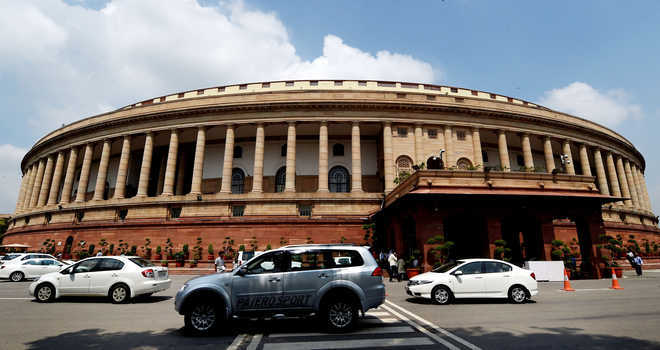 Parliament today witnessed a political storm over the Supreme Court’s February 7 order on reservation in public posts with the government assuring both Houses of appropriate steps to address the matter.

SC on reservation in promotions...

After the Congress-led Opposition and NDA partners Lok Janshakti Party, Apna Dal and JD(U) contended that the SC order was anti-Dalit, Social Justice Minister Thawar Chand Gehlot informed the Lok Sabha and Rajya Sabha that the government was reviewing the judgment and would act appropriately. The government could either consider a review petition in the matter or a legislation. “This is a very important issue. We are conducting a high-level review. The Government of India was neither made a party to this case nor was its affidavit sought. The SC order emanates from a September 5, 2012, decision of the then Congress-led government of Uttarakhand to not grant reservation in promotions to SCs and STs.

‘In Sangh’s DNA to erase quota’

The RSS and BJP cannot stand the idea of Dalits having reservation. It is in their DNA to try and erase reservation but no matter what their fantasies, we won’t let it happen.

Our government is committed to the welfare of the SCs and STs and will take appropriate steps in this matter,” Gehlot said as the Opposition walked out in the Rajya Sabha.

The SC order emanates from a Sept 5, 2012, decision of the then Cong-led govt of Uttarakhand to not grant quota in promotions to SCs and STs.

As the issue snowballed into a Congress-BJP slugfest, Defence Minister Rajnath Singh rued its politicisation. “I had urged everyone to wait for the minister’s statement on the matter. In 2012, the Congress government was at the helm in Uttarakhand. The way Congress is politicising such a sensitive issue is a very serious matter,” Rajnath said in the Lok Sabha after Congress MPs stormed the well shouting “Modi government shame-shame” slogans.

Earlier today, former Congress chief Rahul Gandhi accused the BJP and the RSS of trying to erase reservation. Rahul contended that the incumbent BJP government of Uttarakhand was the one to appeal in the SC against the .2

In 2012, the Congress government was at the helm in Uttarakhand. The way Congress is politicising such a sensitive issue is a very serious matter.

The issue rocked both Houses, where Congress sought adjournment of proceedings to have a discussion. The matter ultimately came up in Zero Hour with NDA partners LJP, Apna Dal and JD(U) demanding a law under the Ninth Schedule to settle the quota debate forever.

Union MoS for Social Justice Ramdas Athawale (RPI) too pressed for the law after minister Ram Vilas Paswan (LJP) defended the government, saying that “the BJP government had brought a law to undo the SC’s dilution of the SCs/STs Prevention of Atrocities Act.” The Congress, meanwhile, threatened a privilege notice against Gehlot, saying that “he misled the House”. The party’s objection was to Gehlot’s allusion to the Congress’ 2012 link in the matter.