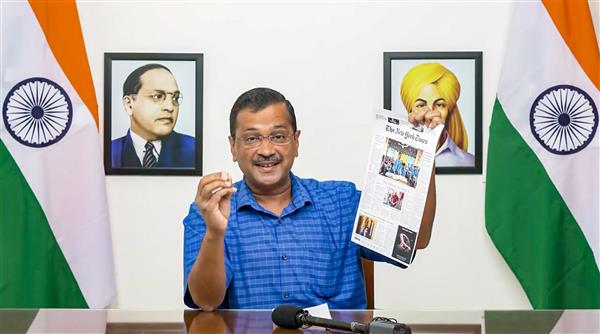 The New York Times story on Delhi’s education system was based on “an impartial and on-the-ground reporting”, the American newspaper said on Friday, rejecting the paid news charge.

The report triggered a war of words between the BJP and the Aam Aadmi Party after the CBI raided the residence of Delhi Deputy Chief Minister Manish Sisodia, who also holds the education and excise portfolios, on Friday in connection with alleged irregularities in the framing and implementation of the AAP Government’s excise policy.

The AAP said the Narendra Modi Government sent the CBI to Sisodia’s home after The New York Times carried a positive story on the Delhi model of education, and the BJP hit back saying it was a “paid” article.

Requested for a clarification on the matter, the NYT’s external communications director Nicole Tylor told PTI in an email, “Our report about efforts to improve Delhi’s education system is based on impartial, on-the-ground reporting.”

She said education is an issue that The New York Times has covered over many years.

“Journalism from The New York Times is always independent, free from political or advertiser influence,” she added.

On the charge that the same story was also published by the Khaleej Times, Tylor clarified, “Other news outlets routinely license and republish our coverage.”

On August 18, The New York Times published the story, titled ‘Our children are worth it’, on the front page of its international edition, highlighting the “broader transformation of Delhi’s education system” during the Aam Aadmi Party regime and noting that “the overhaul of the public schools in the capital of India has students clamouring to enroll”.

Along with the story, the NYT published a picture of Sisodia with three girl students of Delhi government schools, with the caption, “Manish Sisodia, the Delhi education minister, started the overhaul by making surprise visits to schools. Now other states in India are pushing to adopt the Delhi model.”

Hitting back, the BJP dubbed the NYT story published with a photograph of Sisodia as “paid news” and accused the Kejriwal dispensation of “wasting” public money on such publicity.

“How is it that New York Times and Khaleej Times carry exactly the same article, word by word, authored by the same person, same pictures (that too of a private school) on Delhi’s non-existent education model?” BJP IT cell chief Amit Malviya asked in a tweet.

“Arvind Kejriwal’s best defence is nothing but paid promotion...,” he added.

Responding to the charges, the AAP said, “It is outrightly funny and stupid that the BJP is claiming the NYT story to be a paid article. Anyone working in the media can look at an article and gauge if it is paid or not.”

The journalist who did this story had formally requested for an interview and photos on the same in March this year. Being a longform print, they conducted a month long exercise over it leading them to churn out stories like that of a student, Pradeep Paswan, the AAP said.

The CBI on Friday raided the home of Delhi Deputy Chief Minister Manish Sisodia and 20 other locations in connection with the Delhi Excise Policy as the agency claimed that Rs 1 crore had allegedly been paid to a company belonging to a close associate of the AAP politician.