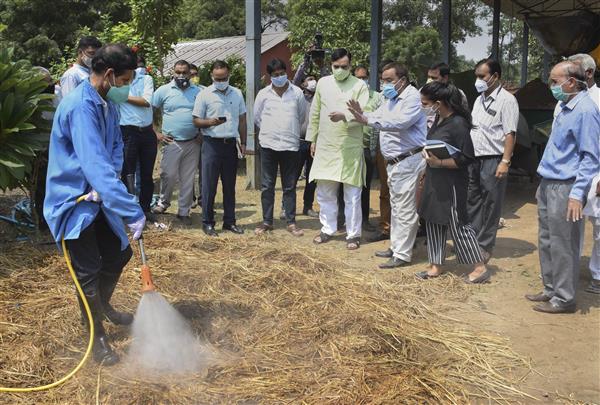 Delhi Environment Minister Gopal Rai during demonstration of bio-decomposer techinque to solve pollution related issues due to stubble burning in the winters, at Pusa Agricultural Institute in New Delhi. PTI

Delhi Environment Minister Gopal Rai on Wednesday witnessed a demonstration of a bio-decomposer developed by the Indian Agricultural Research Institute to convert crop stubble into manure and said if successful, it will help reduce air pollution.

He said he will discuss the technique, which involves spraying the decomposer on crop stubble, with Chief Minister Arvind Kejriwal and later a work plan will be developed for its implementation.

Every year, Delhi’s air quality plummets as farmers in the national capital and neighbouring states burn agricultural stubble to clear their fields before the onset of winter to sow the next crop.

Farmers claim that setting their fields on fire is the only economically viable solution to clear stubble before the sowing season starts.

Rai said the Delhi government will provide the bio-decomposer to farmers free of cost.

“The cost of spraying the decomposer in fields will be borne by the Delhi government so that there is no financial burden on the farmers and an effective solution to the problem of stubble burning can be developed,” he said.

The minister said the Central government has devised a scheme under which subsidy is provided to farmers for using machines to clear crop stubble.

“I believe that the money spent on the purchase of machines and the subsidy can be used for the decomposition of stubble in these states. If successful, the technique will reduce smoke and air pollution,” he said.

The Union Environment Ministry has a very important role to play in this initiative, he added.

Delhi faces air pollution every year in winter due to the burning of crop stubble in neighbouring states, Rai said.

Rai said the Delhi government will talk to the Union Environment Ministry and the governments of neighbouring Punjab, Haryana and Uttar Pradesh for coordination in implementing the bio-decomposer technique.

The Delhi government is keen to develop a sustainable and effective solution to the issue of stubble burning that causes major pollution in Delhi, especially during the winter season, he said.

An official of the Indian Agricultural Research Institute said it has received an advance order from the Uttar Pradesh government to demonstrate the technique on 25,000 hectares of land.

He said around 10 companies are manufacturing the institute’s bio-decomposer on a large scale. PTI