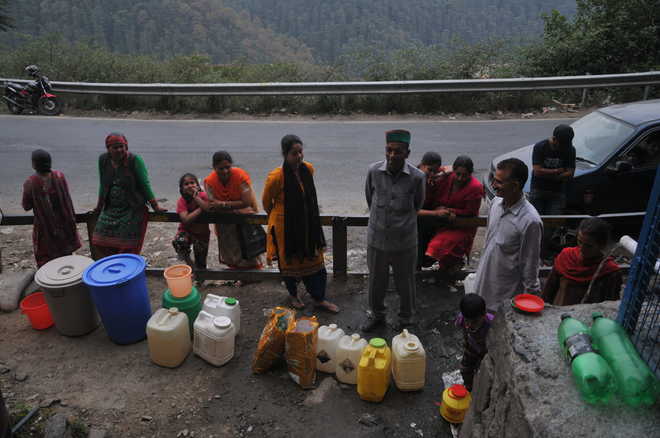 The first-of-its-kind study that covers some 13 towns in the four countries shows that Himalayan tows faced increasing water scarcity because of unplanned urbanisation coupled with the effects of climate change.

It attributes this increased water insecurity to poor water governance, lack of urban planning, poor tourism management during peak season, and climate-related risks and challenges, and that, if the current trend kept up, the gap between demand and supply could double by 2020.

The study says that local population used groundwater resources to supplement their inadequate water supply, which it was unsustainable in the long-term.

“There is a lack of long-term strategies for water sustainability in urban centres, and this requires the special attention of planners and local governments,” the study says.

“Urbanisation has pulled people from rural areas in the HKH region into nearby urban centres.  Although only 3 per cent of the total HKH population lives in larger cities and 8 per cent in smaller towns, projections show that more than 50 per cent of the population will be living in cities by 2050. This will naturally place tremendous stress on water availability.”

The gap between demand and supply in eight of the surveyed areas was between 20 and 70 per cent.

At least three-fourths of the urban areas in this region leans heavily on natural springs for their water—the study found that their dependence on such a source ranges anywhere between 50 and 70 per cent.

The solution and the conclusion

The study suggests a holistic water management approach, which includes spring-shed management and planned adaptation to deal with the problem.  It also said that other options could be explored.

From the case studies of the Himalayan towns, it is evident that increasing urbanisation and climate change are two critical stressors that have an adverse effect on the biophysical environment of urban Himalaya.

With development plans and policies focusing more on rural areas, issues surrounding urban environments remain neglected. The depletion of natural water resources, encroachment and the gradual disappearance of traditional water systems such as stone spouts, wells, and local water tanks are evident across the region.

The degradation of water bodies invariably affect wetland ecosystems and also reduce the general capacity of retention that helps prevent flooding. This, in turn, causes impairment of urban drainage and flood management systems.