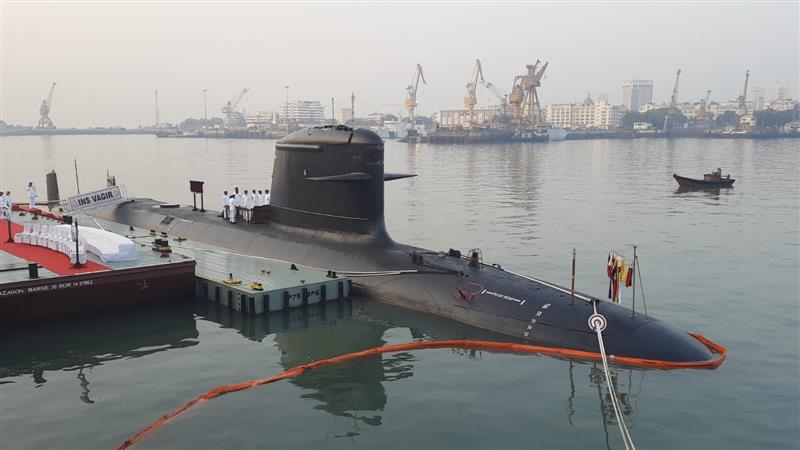 INS Vagir, the fifth submarine of the Kalvari Class submarines, was commissioned into the Indian Navy on Monday, giving a boost to the force's prowess.

INS Vagir, which has been built by Mazagon Dock Shipbuilders Limited (MDL) here with technology transfer from France, was commissioned in a ceremony attended by Chief of Naval Staff Admiral R Hari Kumar.

"The submarine will boost the Indian Navy's capability to further India's maritime interests in deterring the enemy, and conducting Intelligence, Surveillance and Reconnaissance to provide decisive blow in the times of crisis," the Navy said.

'Vagir' means sand shark, which represents stealth and fearlessness, two qualities synonymous with the ethos of a submariner, it said.

Describing Vagir as a "lethal platform" with a formidable weapons package and state-of-the-art stealth technology, Admiral Kumar said its capabilities and firepower would not only enhance the Navy's combat potential but also "add teeth" to the country's deterrence.

Vagir would be the third submarine inducted into the Navy in a span of 24 months, Kumar said.

"This is no small achievement, and underscores the coming of age of India's shipbuilding industry, and the maturing of our defence ecosystem. It is also a shining testimony to the expertise and experience of our shipyards to construct complex and complicated platforms," the Admiral added.

MDL Chairman and Managing Director Narayan Prasad said Vagir completed sea trials in 11 months from February 2022, adding that its commissioning comes at a very crucial time when the geopolitical environment demands that the country respond adequately to safeguard its national interest.

Apart from adding more teeth to Indian Navy's prowess, the induction of Vagir into the Indian Navy is a shining example of making a very strong and determined foray towards the 'Make in India' initiative, Prasad said.

Equipped with some of the best sensors in the world, the INS Vagir's weapons package includes sufficient wire-guided torpedoes and sub-surface-to-surface missiles to neutralise a large enemy fleet, the Navy said.

The submarine also has the capability of launching marine commandos for special operations, while its powerful diesel engines can quickly charge batteries for a stealth mission, the Navy added.

For self-defence, it has a state-of-the-art torpedo decoy system, the Navy release added.

The commissioning of INS Vagir comes amid the increasing presence of the Chinese Navy in the Indian Ocean.

Vagshir, the last of the Kalvari submarines, is at an advanced stage of construction and is being readied to commence her first surface sea sorties in March-April.