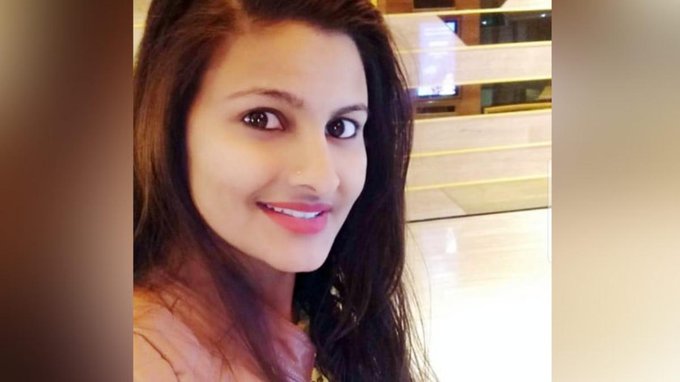 Woman police constable from Surat Sunita Yadav is being hailed as a hero on social media platforms days after her strict action led to the registration of an FIR and arrest of a Gujarat minister's son for alleged violation of lockdown and curfew norms.

The son of Gujarat Minister of State for Health Kumar Kanani and his two friends were arrested on Sunday for allegedly violating the lockdown and night curfew orders in Surat, a COVID-19 hotspot, a senior police official had said.

The arrests of Prakash Kanani, the son of the Varachha MLA, and his two friends, came after a video of heated exchange between them and Yadav, who pulled up the trio for violations, surfaced on social media. The trio was later released on bail.

Since then, Yadav is getting praised on social media for "taking on" the BJP minister's son and his friends.

While some are calling her "Lady Singham" (after the tough cop in Hindi film 'Singham') and want her to lead the entire police force of Gujarat, some even suggested to give her ticket for the 2022 Assembly polls and pit her against Kumar Kanani, who represents Varachha in Surat district.

Her "brave act" earned accolades from the masses as well as famous personalities with "#i_support_sunita_yadav" trending on Twitter.

Swati Maliwal, Chairperson of the Delhi Commission for Women, also extended her support and tweeted the video in which Yadav can be seen talking to Kumar Kanani over phone in the presence of his son, who was later on booked for moving around during night curfew.

"Don't teach an honest officer how to do the duty.

First teach your sons how to behave. Officers like Sunita Yadav need to come forward to rein in such stubborn people," said Maliwal in her tweet.

"During my Service, I saw SPs whose Caliber was worse than that of Constables, while, I also saw Constables who would have become better SPs given the Opportunity.

#i_support_sunita_yadav & appreciate Her Courage & Commitment. Violators of Law must be booked whosoever they may be," Vanzara tweeted.

One Pradeep Yadav said the "lady cop" is brave "and must be protected against any political revenge.

"She's taking the class of the son of an MLA who violated Night Curfew Rule. #i_support_sunita_yadav," Pradeep Yadav tweeted.

"I see @thekiranbedi in this Cop. @thekiranbedi Ma'am, history repeats again, you fought against Mrs Gandhi, it is time to fight again for her. Please help her.

A user named Vishal Pisavadiya said the country "needs more Officers like you Mam. We are proud of you."

After Yadav hit headlines, at least five different Twitter handles with her name have emerged.

While some have voluntarily declared themselves as Parody accounts, some claimed they are "authentic" ones run by Yadav.

Since Yadav has maintained distance from the media, confusion still prevails about her real Twitter as well as Facebook accounts.

However, people are using all these accounts to express their solidarity for her.

A senior police officer from Surat on Monday said none of the Twitter accounts in the name of Yadav is actually run by her.

She has confirmed to the police that she does not have a Twitter account, the officer added.