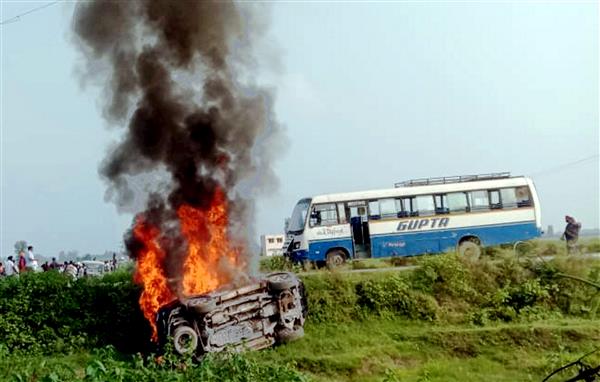 The Supreme Court on Wednesday granted interim bail for eight weeks to Union minister Ajay Kumar Mishra's son Ashish Mishra, who is accused of killing farmers by running them over with his car in Lakhimpur Kheri during the 2021 farmers’ protest.

A Bench led by Justice Surya Kant -- which had on January 19 reserved its order on the bail plea of Ashish Mishra -- asked Ashish Mishra to leave Uttar Pradesh within a week of his release.

The Bench said he could not stay in UP or NCT of Delhi and would inform the trial court about his location and had to mark his attendance in the police station of the jurisdiction of his location.

Any attempt by Mishra or his family to influence witnesses would lead to cancellation of bail, the top court said.

It said if it's found that he was trying to delay the trial, it would be a valid ground to cancel his interim bail.

Awaiting the trial court's report on the status of witnesses being examined, it posted the matter for March 14. After examining his conduct, the top court will decide on extending his bail.

"It is about balancing the rights of parties. There should not be indefinite incarceration," the Bench had said on January 19, noting that the trial might take five years to conclude.

Four farmers were mowed down by an SUV in Lakhimpur Kheri when those against farm laws were holding a demonstration against Uttar Pradesh Deputy Chief Minister Keshav Prasad Maurya’s visit on October 3, 2021. In the subsequent violence, two BJP workers, a driver and a journalist were killed. It was alleged that Ashish was sitting in one of the cars.

A Lakhimpur Kheri court had on December 6 framed charges against Ashish Mishra and 12 others for murder, criminal conspiracy and certain other offences in the case. Virendra Shukla, the 14th accused – who is out on bail -- has been charged under Section 201 of IPC for causing disappearance of evidence.

On behalf of the Uttar Pradesh government, Additional Advocate General Garima Prashad had opposed Mishra’s bail plea, saying the crime was grave. "It is a grave and heinous crime and granting bail will send a wrong signal to society," she said.

Senior advocate Dushyant Dave, representing some of the victims, had vehemently opposed the bail plea, saying giving bail to the main accused – who was an influential person -- would send a terrible message to society.

"It's a conspiracy and a well-planned murder. I will show from the charge sheet... He is the son of a powerful man being represented by a powerful lawyer," Dave had submitted.

On behalf of Mishra, senior advocate Mukul Rohatgi had countered Dave's arguments. "What is this? Who is powerful? We are appearing every day. Can this be a condition not to grant bail?" he had asked.

Rohatgi had argued that Ashish Mishra had no criminal antecedent and he had been in custody for more than a year and the trial was likely to take seven to eight years. "My client got bail in the first instance. This is not a cock and bull story and there is truth in my story," he had said, adding the complainant was not an eyewitness and the complaint was based on hearsay.

Maintaining that a balance has to be struck between the rights of the victims and those of the accused, the Supreme Court had on December 12 wondered how long Ashish Mishra could be kept in jail.

A sessions judge -- conducting trial in the case – had earlier told the top court that it might take around five years to conclude the trial in the normal course in view of the fact that there were 208 prosecution witnesses, 171 documents and 27 forensic science laboratory reports to be examined.