Fearing lockdown, 20% of 1.5 lakh-strong workforce leaves city over the weekend 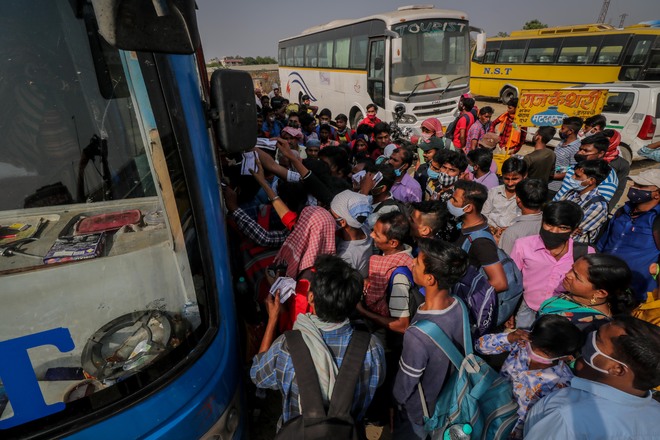 The rising Covid cases, imposition of curbs, night curfew and fear of another lockdown has prompted the exodus of thousands of migrants from Gurugram. Fearful of being stranded without food and money, the migrants —- primarily employed in Gurugram industries —- are making a dash for their villages. Nearly 20 per cent of the 1.5 lakh-strong workforce reportedly left this weekend, leaving the industry in a panic.

“It’s shocking that 20 per cent of the workforce here has not reported to work today in the Udyog Vihar industrial zone. We have learnt that they have all left for their villages. To allay their fears, we have spent the day making announcements that they would be looked after and there was no order for lockdown,” said Animesh Saxena, president of Udyog Vihar Industrial Association. Udyog Vihar has around 75,000 workers while the rest are mainly from the Manesar auto industry zone.

Labour colonies in Manesar are wearing a deserted look as workers began leaving their “chawls” since Friday, said sources. Since the cases began to rise, migrants have been on tenterhooks over speculation about a second lockdown. Every day hundreds of migrant families from UP, Bihar, Jharkhand and Bengal board buses to leave the city. “During the lockdown last year, my wife and I had to literally walk to Aligarh with our ailing four-year-old son. We are taking no chances this time. Last time the lockdown was announced suddenly, we expect the same this time… so we are leaving. Along with 10 other families, we have hired a special bus to take us to UP,” said Afzal, a factory worker in Manesar who left the city this morning.

“We got messages on WhatsApp about the lockdown possibility in Delhi and Gurgaon. We will be left without jobs and will have to beg for food again. We will have no money to pay rent, therefore we are leaving. I will come back once the situation improves,” said Raghuveer Yadav from Bihar.

The industry blames the administration for not allaying the apprehensions of the migrants and spelling out the strategy to tackle the pandemic.

“No official announcement or assurance has reached these workers from the administration or their representatives like councillors or sarpanches. Thus, they are not ready to trust us. During the last lockdown, we made a database of all workers and are now getting the HR department to assure them that in case of any curbs, we will give them dry ration, food and salaries,” added Saxena.