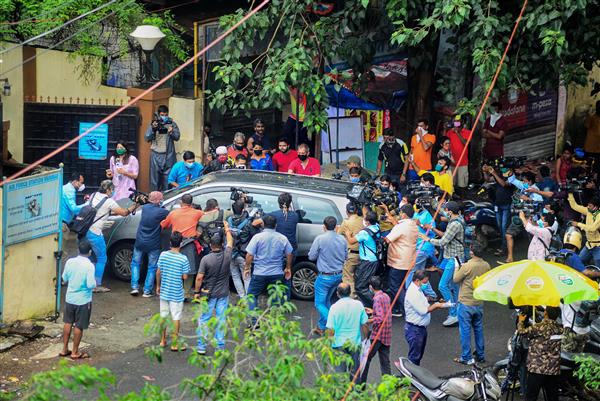 Bollywood actress Rhea Chakraborty along with her brother Shovik Chakraborty arrives at DRDO guest house for questioning, at Santacruz in Mumbai. PTI

The CBI questioned actress Rhea Chakraborty for the third consecutive day on Sunday in connection with her boyfriend and actor Sushant Singh Rajput’s death case, a police official said.

The 28-year-old actress, who is accused of abetting Rajput’s suicide, was questioned for around nine hours, he said.

Her brother Showik Chakraborty was also questioned by the Central Bureau of Investigation (CBI) on Sunday for the fourth day in a row, the official said.

“Rhea Chakraborty and her brother together reached the DRDO guest house at Kalina in Santacruz, where the probe team is stationed, around 10.30 am,” he said.

A Mumbai Police vehicle escorted the car in which the two arrived at the guest house, he said.

“Rhea and her brother left the guest house around 7 pm,” the official said, adding that the central agency has questioned the actress for around 26 hours in three days.

Four women constables from Vakola police station were sent to the DRDO guest house to accompany Rhea during the interrogation, he said.

Rhea had been questioned for nearly 10 hours on Friday and allowed to return home under police escort as a large number of media personnel were present outside her building.

She was quizzed for around seven hours on Saturday.

Her brother is being questioned by the CBI since Thursday.

Rajput (34) was found hanging in his flat in suburban Bandra on June 14.

Rhea had been earlier questioned by the Mumbai Police in the case. The Enforcement Directorate has also quizzed her in a related money laundering case.

The Supreme Court last week upheld the transfer of an FIR, lodged by Rajput’s father in Patna against the actress and others for allegedly abetting his son’s suicide and misappropriating his money, to the CBI. PTI