Opposes transfer of Patna FIR to CBI; says she is being made ‘scapegoat of political agendas’ 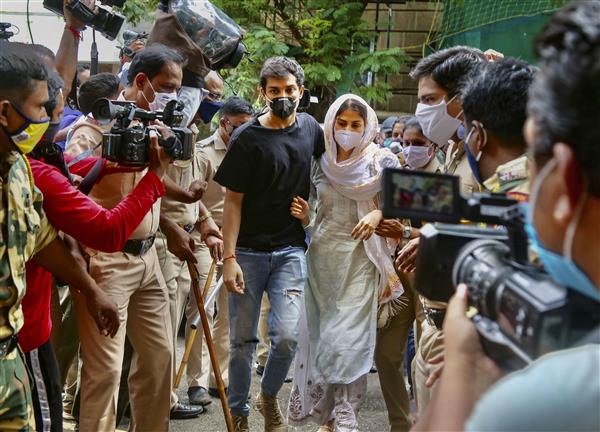 Bollywood actress Rhea Chakraborty and her brother Showik leave after a fresh round of questioning by ED, in Mumbai, on Monday, August 10, 2020 PTI

Actor Rhea Chakraborty on Monday filed an affidavit in Supreme Court accusing the media of sensationalising the death of Sushant Singh Rajput and conducting a parallel media trial.

“The issue is blown out of proportion in Media. Media Channels are examining and cross-examining all the witnesses in the case,” Rhea submitted.

She is being investigated by the CBI as an accused and ED too has interrogated her.

Alleging that the issue was being exploited for political mileage in Bihar polls due in November, she told the top court that “she should be protected and not be made scapegoat of political agendas”.

“The sad incident of the death of Sushant Singh Rajput who hailed from Bihar unfortunately occurred just in wake of elections in Bihar. This has led to the issue of suicide of deceased being isolated and blown out of proportion. Actors Ashutosh Bhakre (32) and Sameer Sharma (44) were also reported to have committed suicide in last 30 days and yet no whisper about the same in power corridors. In case of death of Sushant Singh Rajput, Chief Minister of Bihar is reported to be responsible for registration of FIR in Patna,” she said.

The affidavit has been filed ahead of the hearing of her petition seeking transfer of an FIR registered in Patna against her to Mumbai later this week.

Rhea said, “Petitioner (she) is already convicted by media even before a foul-play in the death of Sushant Singh Rajput is established.”

Her transfer petition is likely to come up for hearing before a Bench headed by Justice Hrishikesh Roy on Tuesday.

Both Bihar Government and Sushant’s father KK Singh have opposed her petition, saying her plea has become infructuous after the matter was handed over to the CBI. Sushant’s father accused her of giving drug overdose to the deceased.

However, Rhea opposed transfer of the Patna FIR to the CBI on the ground that it was without jurisdiction and didn’t comply with the requirements of Section 6 of the Delhi Special Police Establishment Act.

Maharashtra government, too, has opposed transfer of the probe to the CBI.

Rhea also complained of violation of her right to privacy. “Extreme trauma and infringement of privacy of the rights of petitioner is caused due to constant sensationalisation of this case,” she submitted.

“Media had convicted accused in 2G and Talwar case in similar fashion where each and every accused was later on found innocent by courts,” Rhea contended.

“Investigation into financial scams of thousands of crores by Enforcement Directorate and CBI never see the light of the day and at drop of a hat, cases gets registered even without there being a jurisdiction in the foundational case,” she submitted.