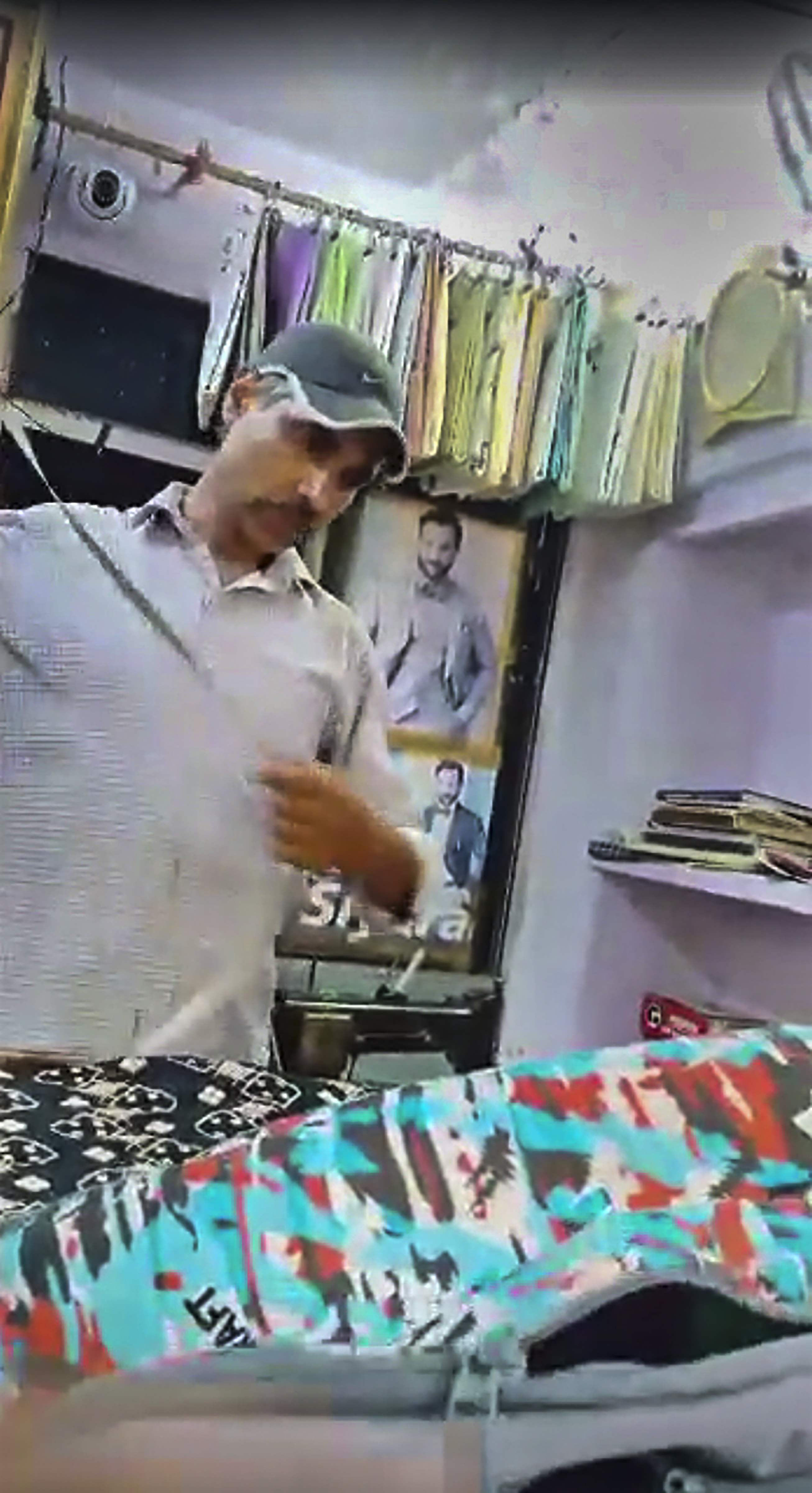 Kanhaiya Lal, a tailor at his shop before he was attacked by an assailant with a sharp weapon while the other filmed the crime, in Udaipur on Tuesday. PTI Video Grab

Brutal daylight murder of a tailor in Udaipur's Bhootmahal area on Tuesday sent shock waves across the city with tension prevailing in the area and Rajasthan chief minister Ashok Gehlot appealing for peace.

Within hours, prohibitory orders banning the assembly of people were imposed across the state for a month and mobile internet services suspended for the next 24 hours. At 8 pm, curfew was declared till further orders in seven police station areas of Udaipur city.

The two accused were later arrested from Rajsamand with Gehlot promising speedy justice under the fast track scheme of the government.

Kanhaiya Lal, a 40-year-old tailor, was beheaded by two assailants in his shop ten days after he published a social media post supporting BJP's now suspended spokesperson Nupur Sharma who had invited widespread wrath for her remarks against the Prophet.

The assailants entered Kanhaiya Lal's shop on the pretext of ordering clothes and before he could sense any trouble, they attacked him with swords, beheading him.

The accused later posted videos of the crime online and took responsibility even as CM Gehlot urged everyone to refrain from sharing the shocking video.

Local reports suggested Kanhaiya Lal had been receiving threats from persons of a certain community ever since he came out in Nupur Sharma's support. He had approached the cops who told him to be careful but took no preventive action.

Local shopkeepers who downed their shutters after the horrific murder today said Kanhaiya had not opened his shop for six days and came in only today.

Heavy police deployment was ordered in the area and shops in five nearby areas were closed. Family members of the victim raised hue and cry over the state of affairs in the city and demanded justice.

District Collector Tata Chand Meena and SP Manoj Chaudhary visited the spot, where locals were said to be raging over the murder and the impunity of the crime.

Even as videos surfaced on social media and netizens expressed absolute shock, CM Ashok Gehlot tweeted, "I condemn the brutal murder of a young man in Udaipur. Culprits will face the law and the police will go to the bottom of this crime. I appeal to all sides to maintain peace. Everyone involved in this brutal murder will be meted out the severest possible punishment."

The CM described the crime as "brutal beyond imagination" and said he had spoken to the leader of opposition in the state assembly Ghulab Chand Kataria seeking support in maintaining communal harmony in the state and Udaipur.

Gehlot added that there was an atmosphere of tension and distrust in India.

"What has happened is extremely sad, shameful. There is tension in the country. I have been repeatedly urging Prime Minister Narendra Modi and Home Minister Amit Shah to address the people and calm the tempers. Every nook and alley is volatile. People are in fear. The PM should appeal for peace. It will help," Gehlot said, promising to bring the murderers of Kanhaiya Lal to justice.

The guilty will not be spared, the police have already been deployed for making arrests, said the CM. He said the trial will be fast-tracked under the state's “case officer scheme”.

Meanwhile, curfew was imposed in seven police station areas of Udaipur from 8 pm till further orders on Tuesday.

The curfew will be in force from 8 pm on Tuesday till further orders, according to the order. However, those engaged in essential services, students appearing in exams and staff engaged in examination process will be exempted.

Meanwhile, mobile internet has also been suspended in the city.

“A state-level alert has been issued and range IGs and SPs have been asked to increase patrolling and force mobility as a precautionary measure,” ADG Law and Order Hawa Singh Ghumaria said.

About 600 more policemen, including five companies of the Rajasthan Armed Constabulary, were sent to Udaipur, officials said. Senior police officers were also rushed to the city.