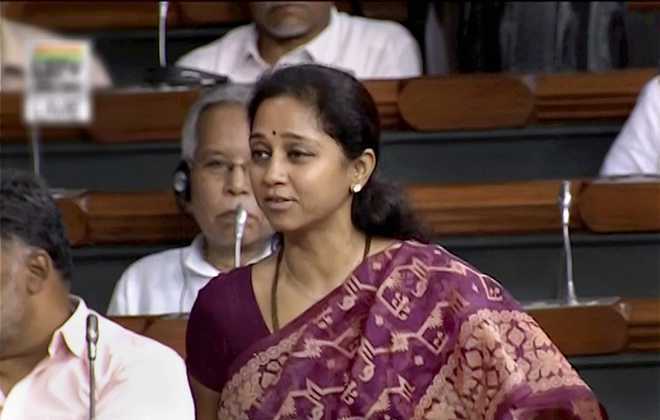 Opposition parties, including the Congress, in the Lok Sabha today demanded restoration of Member of Parliament Local Area Development Scheme (MPLADS) funds, even as they supported the government’s decision to cut salaries of MPs.

Participating in a discussion on the Salary, Allowances and Pension of Members of Parliament (Amendment) Bill, 2020, in the lower house, members of the Congress, TMC, BJD, NCP, TRS, TDP and other parties pitched for restoration of the funds.

“Take away all our salary but restore MPLADS funds” was the general sense among Opposition MPs, who supported the Salary, Allowances and Pension of Members of Parliament (Amendment) Bill brought by the Modi government today to replace the ordinance on 30 per cent cut in salaries of sitting MPs to mobilise money to fight against Covid-19.

NCP MP Supriya Sule questioning “the logic behind increasing petrol and diesel prices” while people in the country were reeling under the impact of Covid-hit economy, advised the Modi government to reduce its expenditure. “We are all together on this (the Bill), but why are you not reducing your expenditure,” she said.

Alleging “lack of transparency” in the PM CARES fund, she said: “What are you hiding? We will be happy to give up our entire salary, but the Rs 20,000-crore Central Vista project must also be cancelled.” She added that she would rather prefer a hospital with all facilities like ventilators etc.

In April, the Cabinet gave its nod to the government’s decision to suspend MPLADS scheme for two years, along with a 30 per cent cut in salaries of sitting MPs to mobilise money to fight against Covid-19.

The suspension of the MPLAD scheme, especially during a pandemic, has invited much criticism from several MPs, who asked the government to “give back people their rightful money”.

Congress’ Adhir Ranjan Chowdhury questioned if any BJP MP can say he or she does not need MPLAD funds. “No one from ruling side said nothing about MPLAD. We should pass a unanimous decision for restoring the funds,” Chowdhury said.

AAP MP Bhagwant Mann also said the government should take away the salary, but give them the public funds money with “guidelines on expenditure”.