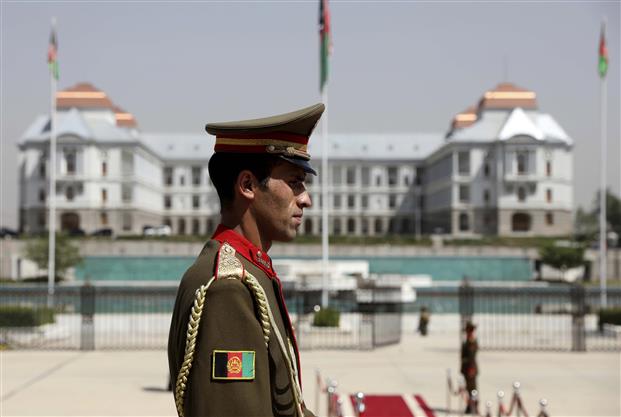 An Afghan honor guard stands alert as he awaits the arrival of President Ashraf Ghani for an extraordinary meeting of the Parliament in Kabul, Afghanistan, on August 2, 2021. AP/PTI photo

The Foreign Office is yet to react to the Taliban stating that they will not threaten the economic projects in Afghanistan of any country, including India, provided they stopped giving firepower support to the Ashraf Ghani-led government in Kabul.

This is the first time the Taliban have reportedly been conciliatory towards India though their delegation has gone around to neighbouring countries such as Iran, Russia and China, handing out similar proposals. Without commenting on the genuineness or sincerity of the message conveyed through an interview by Taliban spokesman Zabiullah Mujahid, a source pointed out that the statement comes from a considerably low-ranking member as compared to Taliban delegation members that visited Beijing, Moscow and Tehran.

“We do not threaten or oppose economic projects by any country. We are in favour of other countries investing in our country. We had a trip to China a few days ago, one of our main demands was that they should cooperate with Afghanistan in trade and investment,” he said in an interview made available by an Afghan news agency.

Mujahid is believed to be one of the multiple individuals using the persona to communicate Taliban’s message to Afghan and other international media. The Taliban spokesman made all the right noises in the interview by denying that the outfit viewed India through the lens of Pakistan. The Taliban wanted “good relations with India as an important country in the region,” he assured.