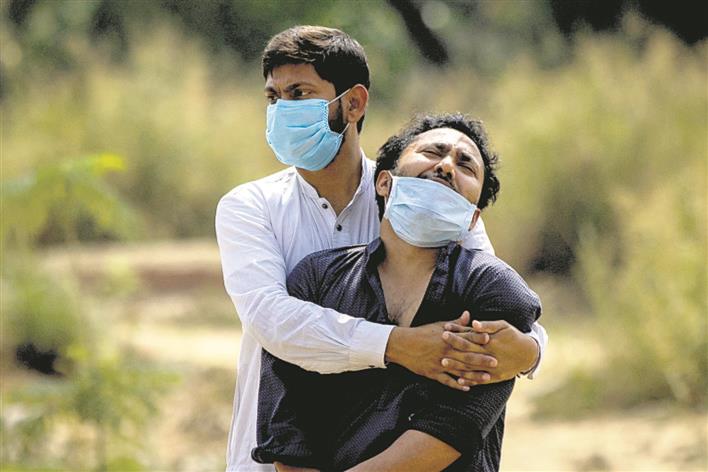 A man grieves for his father, who died of Covid-19, in Delhi. REUTERS

Nationwide panic over shortage of medical oxygen to treat Covid patients saw Prime Minister Narendra Modi ordering seamless movement of oxygen tankers through interstate barriers today even as Maharashtra demanded that supplies be airlifted to save time and lives.

Maharashtra CM Uddhav Thackeray appealed to the PM to enlist choppers to airlift medical oxygen and drop supplies where these were most needed. Maharashtra’s oxygen demand is going through the roof as the state continues to contribute the most to daily Covid burden.

The PM has told officials to ensure seamless movement of tankers carrying oxygen throughout the country and the government said it had exempted tankers from registration of permits to enable quick movement.

“The states and transporters have been asked to move tankers round the clock with drivers working in shifts to ensure faster turnaround and adequate capacity to meet the surge in demand. Cylinder filling plants will also be permitted 24-hour working with necessary safeguards.

“The government is allowing industrial cylinders to be used for medical oxygen after due purging. Similarly, nitrogen and argon tankers will be automatically allowed to be converted to oxygen tankers to overcome the potential shortage of tankers,” the officials told the PM.

Meanwhile, the Health Ministry today initiated the process of tendering to import 50,000 MT of medical grade oxygen. The oxygen supply situation remains critical in 12 high-burden states with the demand expected to soar by April 30. These states are Maharashtra, Madhya Pradesh, Gujarat, Uttar Pradesh, Delhi, Chhattisgarh, Karnataka, Kerala, Tamil Nadu, Punjab, Haryana and Rajasthan. The government will supply 4,880 MT, 5,619 MT and 6,593 MT to these 12 states on April 20, 25 and 30 to meet their demands.

Chemicals and Fertilizer Minister DV Sadanand Gowda today said the production of Remdesivir injection, the anti-viral used in hospitalised Covid patients on oxygen, has been raised from 28 lakh to 41 lakh vials a month and the manufacturers had lowered the cost from Rs 5,400 a vial to less than Rs 3,500 a vial by April 15.

The government said 6.69 lakh vials of the injection had been sent to states in the last five days. Amid reports of the injection being black-marketed at over Rs 20,000 a vial, the minister said production was being ramped up.

Uddhav appeals to PM to use choppers where needed