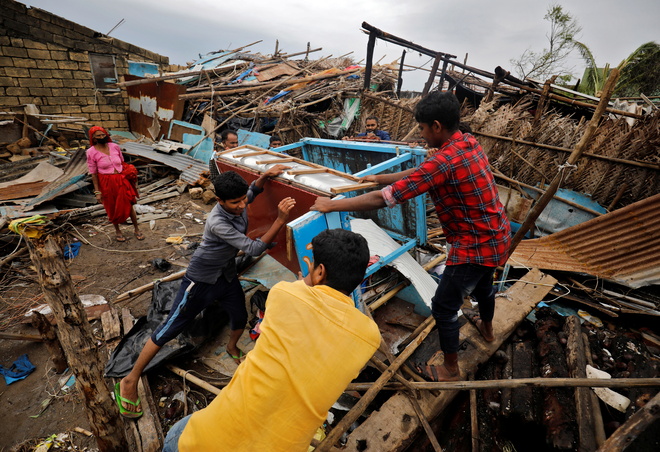 People salvage their belongings from a damaged house after the cyclone in Navabandar village of Gujarat on Tuesday. Reuters

As many as 13 persons were killed in Gujarat as cyclone Tauktae pummelled parts of the state and left behind a trail of destruction along the coast, uprooting electric poles, trees and damaging thousands of houses and roads, officials said on Tuesday.

In what was one of the worst cyclones faced by the state, Tauktae triggered heavy rains in many parts along its way from the Saurashtra coast to north Gujarat with as many as 46 talukas receiving over 100 mm of downpour, while 12 of them recorded 150 mm to 175 mm of rains.

New Delhi: Union Home Minister Amit Shah on Tuesday discussed the prevailing situation after the landfall of Tauktae with the CMs of Gujarat, Maharashtra and Rajasthan. TNS

Tauktae, characterised as an extremely severe cyclonic storm on Monday, has now weakened into a “cyclonic storm” and will gradually become a “deep depression” as it moves northwards, the IMD said.

Over 16,000 houses were damaged, more than 40,000 trees and over 70,000 electric poles uprooted, while 5,951 villages faced total power blackout due to the cyclonic storm in Gujarat, Chief Minister Vijay Rupani said. Prime Minister Narendra Modi will visit Gujarat and Diu on Wednesday to personally review the situation and damage due to Cyclone Tauktae. — PTI