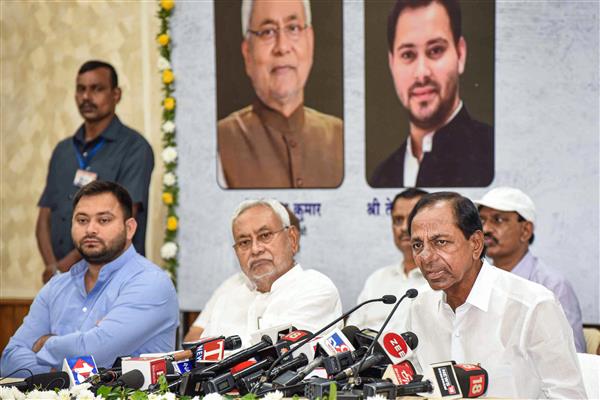 In a major political development in the run-up to 2024 Lok Sabha elections, Telangana Chief Minister K Chandrashekher Rao today arrived in Patna where he attended a public event with JD-U supremo and Bihar chief minister Nitish Kumar and his deputy, Tejashwi Yadav of the RJD.

Later, addressing a media conference flanked by Kumar and Yadav, KCR slammed Prime Minister Narendra Modi for “ruining country’s economy and harmony and giving its people nothing more than slogans in the past eight years” and called for a “BJP mukt Bharat”

“What we need now is BJP-mukt Bharat (BJP-free India),” said Rao, who has been trying to formulate a non-Congress non-BJP front for several years. A bitter critic of PM Modi, KCR called his Gujarat model a “complete failure” and showered praises on Nitish Kumar. “(Modi’s) Gujarat model is a 100 per cent flop model, there is no doubt about that,” the Telangana CM said

However, KCR refused to answer repeated questions on if Kumar can be the prime ministerial candidate of anti-BJP parties against PM Modi in 2024 amid similar attempts (to cobble a third front) in the past.

“Everyone knows of the past. ‘BJP se khatra hai or us khetra se desh ko bachana ke liye sab sambhav prayas hum karenge’ (there is danger from the BJP and all attempts will be made to save the country from that danger). Nitish Kumar is a senior leader in the country. We will try to unite all opposition parties. We will hold consultations and let you know”, he said.

In reference to the“attempt” as “third front” and whether Congress will be its part,” KCR shot back saying: “It is not a third front...why are you naming it as third front, it is a main front.”

In a scathing review of PM Modi’s eight years in power, KCR claimed the “country has never been in such dire situation before.  ‘Desh ko barbad kar diya hai’. He (PM Modi) has given nothing but slogans”

Addressing the event, Kumar lashed out at the Modi government and criticised its excessive ‘prachaar-prasaar’ (publicity) and “lack of sensitivity towards the needs of the states.”

He also took a veiled dig at BJP which has undertaken an aggressive campaign to expand its base in the southern state saying “Your (KCR’s) adversaries speak a lot against you. Little do they realise what stuff you are made of. You were the one whose single-minded struggle led to the creation of Telangana. The people will never desert you”

His teaming with KCR is being seen as an important step in the direction of achieving opposition unity. Though BJP’s Sushil Kumar Modi called it a “get-together of two daydreamers”

Despite a question mark on the success of being able to achieve a “cohesiveness in spite of inherent contradictions within various anti-BJP groupings,” the meeting in Patna is being seen with great political interest. After his separation from BJP and NDA, this was Kumar's first open attempt with a top leader from the anti-BJP camp.

The JD-U and RJD are trying to project Kumar as a joint opposition candidate against PM Modi in 2024, however, there are others players with similar ambition. KCR’s presence on a joint platform with Kumar and Tejaswi is being seen as an interesting effort to bring opposition leaders under one umbrella to take on Modi-led NDA.

Amid accusations of AAP playing as BJP’s “B team” to “push Congress on the side lines to benefit the saffron parry in poll-bound Gujarat and Himachal Pradesh, all eyes are also on Delhi Chief Minister Arvind Kejriwal visit to Tamil Nadu on September 5 on the invitation of Chief Minister MK Stalin

Stalin has invited Kejriwal to launch schools of excellence and model schools in Tamil Nadu on the behalf of his government, thereby giving rise to speculations about growing closeness between AAP and DMK—a Congress ally—ahead of 2024.