Police drag Andhra CM's sister's car while she sits inside protesting against KCR : The Tribune India 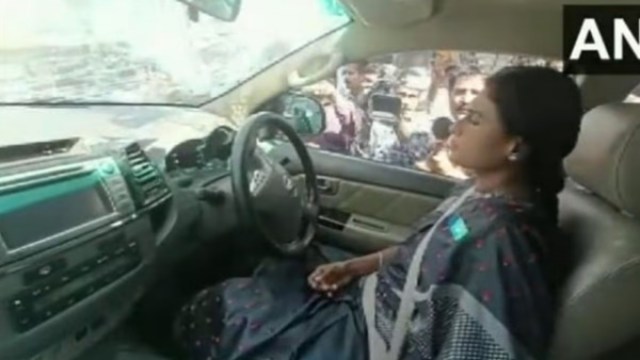 A still from video. ANI

YSR Telangana Party's YS Sharmila's car was on Tuesday towed away by police with her in it during protest against Telangana Chief Minister KCR.

Police dragged away the car of Andhra Pradesh Chief Minister Jagan Mohan Reddy's sister and YSRTP chief YS Sharmila with the help of a crane.

This happened when she was sitting inside the car, protesting against Telangana CM KCR. Sharmila was arrested on Monday and claimed that people linked to KCR's party had attacked her.

The YSRTP workers raised slogans against the ruling party. As they tried to proceed towards the chief minister's residence, police detained them.

As Sharmila refused to get down from the car, the police toed away the vehicle with Sharmila sitting inside it.

She was shifted to the S.R. Nagar Police Station.

The protest march by YSRTP also included the Yatra bus that was stoned and burnt by the TRS activists on Monday.

Sharmila's Yatra bus and other vehicles were attacked at Narasmpet in Warangal district when she was visiting the area as part of her Praja Prasthanam Yatra.

The YSRTP alleged that TRS men went on a rampage indiscriminately attacking the padayatra, stoning and burning the bus, unleashing filthy language and tearing down banners and party flags.

The police later arrested Sharmila on the ground that she was continuing the foot march despite their advice to call it off in view of the tense situation in the area.

#WATCH | Hyderabad: Police drags away the car of YSRTP Chief Sharmila Reddy with the help of a crane, even as she sits inside it for protesting against the Telangana CM KCR pic.twitter.com/i7UTjAEozD

#WATCH | Hyderabad: Police drags away the car of YSRTP Chief Sharmila Reddy with the help of a crane, even as she sits inside it for protesting against the Telangana CM KCR pic.twitter.com/ojWVPmUciW