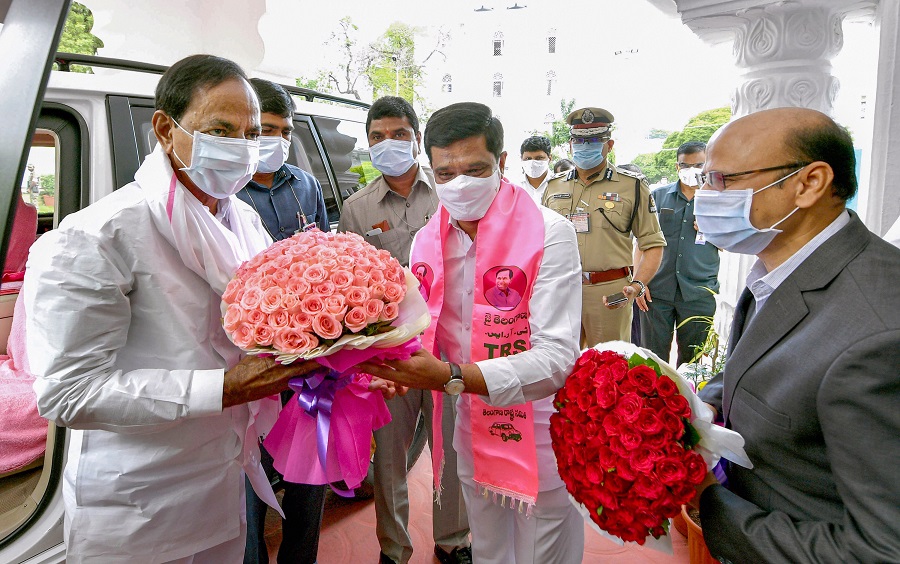 Telangana Chief Minister K Chandrasekhar Rao being welcomed on his arrival on the first day of the Monsoon Session of the State Assembly in Hyderabad on Monday. PTI Photo

Telangana has scrapped the Village Revenue Officer (VRO) system with an aim to introduce transparency and make the revenue setup corruption-free.

The Telangana Vidhan Sabha in its opening day of the Monsoon Session indicated that it will table ‘Revenue Bill 2020’ that will deal with all land records, making the Revenue Department people-friendly.

All the VROs have been asked to submit their records to the office of their respective District Collectors.

The new Bill is expected to be passed without any obstacles as the ruling Telangana Rashtra Samithi (TRS) has a brute majority of 103 MLAs in a House of 119. Once passed, the legislation will replace 139 redundant and irrelevant rules and legislations.

Chief Secretary Somesh Kumar issued an order that stated all the registration work under the Registration and Stamps Department had been suspended till the new system was put in place. This means that there will be no new registration of properties in the state till the ‘Revenue Bill 2020’ is passed in the Vidhan Sabha.

The Revenue Bill 2020 will make legal the use of block-chain technology that will automatically update land records and mutations immediately. A pilot project for the same was being run by the Revenue Department in coordination with the Information Technology and Electronics Department in the Shamshabad area on the outskirts of Hyderabad since 2018.

Chief Minister K Chandrasekhar Rao (KCR) has said that the VROs have proved to be worse than the old patwari system and this needed to be replaced.

The Chief Minister moved a condolence motion that read “this house places on record its deep sense of sorrow at the demise of Pranab Mukherjee, former President of India, and conveys sympathy to the members of the bereaved family”.

“Pranab is the epitome of discipline and hard work. Born in a village in West Bengal he used to swim across a stream to reach his school. He was a man of all seasons and held different ministries with ease and rendered yeoman service to the nation,” said the Chief Minister.

“He played a key role in achieving common ground in the coalition governments and was an excellent troubleshooter. He might have differed with others on issues but never personally criticised anyone. Even if he does, he used to apologise,” he added.

The media was barred from entering the House as were the customary guests. Unlike in the past, there were no handshakes or the typically Hyderabadi hugs among the members of the House. Each one had to go through SOPs prescribed for Covid-19 testing, ensuring sanitisation, maintaining physical distancing and a face mask.

Assembly Speaker Pocharam Srinivas Reddy had announced that only those who go through the exercise will be permitted to enter the House.

The House is also likely to discuss the Union Government’s lackadaisical approach to the GST compensation to states and release of pending funds. KCR has already written to Prime Minister Narendra Modi to intervene and get the state it’s due in the GST.

The state Assembly will also pass a unanimous resolution later seeking Bharat Ratna to be conferred posthumously on former Prime Minister PV Narasimha Rao, whose birth centenary celebrations are being organised in the state throughout the year.

Prime Minister Narendra Modi holds a meeting with the Union ...