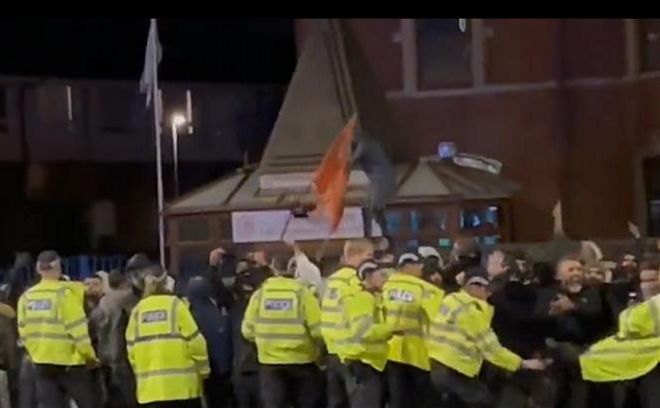 A temple was attacked and a flag atop it was taken down and burnt amid clashes between two communities in the eastern England city of Leicester on Sunday.

There have been reports of tension between Hindu and Muslim groups in the city since fans clashed after India won the Asia Cup T20 match against Pakistan on August 28.

The Indian High Commission in London strongly condemned the violence against the Indian community and the vandalisation of the premises and symbols of Hindu religion.

We have strongly taken up the matter with UK authorities and sought action against those involved in the attacks. — Indian High Commission in London

The High Commission said it had taken up the matter with the authorities and sought immediate action against those involved in the attacks.

Both communities have their own version of story and called each other the aggressor. Sources said a fight broke out on Melton Road in the city on August 28, following which eight persons were arrested.

The Hindu side claimed tensions thickened after the other community members tried to intimidate them. This was followed by a vicious rumour that a Muslim teenager was kidnapped. The Leicester police later confirmed the kidnapping claim was unfounded. The Muslim side claimed a group gathered next to a mosque and shouted religious slogans and threw bottles at them. The Leicestershire police said its operation in the east Leicester area affected by the disorder would continue to prevent any further disorder, with 15 persons arrested.

On the flag being taken down, the police said the matter would be investigated.