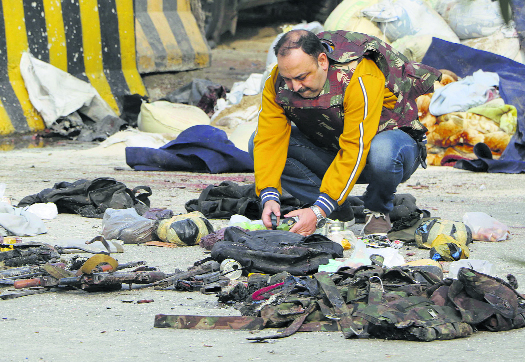 Four suspected Jaish-e-Mohammed terrorists were killed and two policemen injured in a gun battle on the Jammu-Srinagar national highway after a truck carrying freshly infiltrated militants was intercepted near Nagrota today, officials said.

The infiltration of terrorists & induction of arms to fuel terror activities continue unabated. This is not possible without the support of Pakistan forces. - Anurag Srivastava, MEA Spokesperson

When the truck was intercepted by a joint team of police and CRPF personnel, the terrorists on board resorted to firing.

The terrorists had come to execute a “big plan”, which has been foiled, Inspector General of Police, Jammu, Mukesh Singh, said. The IGP, Kashmir, Vijay Kumar, said the four terrorists were on their way to the Kashmir valley to disturb the District Development Council polls scheduled later this month, as Pakistan has been trying to derail the political process.

Briefing media on the encounter, the Jammu IGP said when the truck was stopped for checking at Ban toll plaza in the Nagrota area at 5 am, its driver left the vehicle and fled. CRPF and police personnel moved to search the vehicle and came under fire from the terrorists hiding in the truck.

The militants were asked to surrender but they ignored the announcement, the IGP said, adding that other security forces also joined in, leading to a fierce gun battle in which terrorists lobbed grenades. After a three-hour operation, the security forces managed to kill the four terrorists, but in the process two policemen sustained non-fatal injuries, the IGP said.

The truck, loaded with rice sacks, caught fire during the encounter. The bodies of the terrorists were found in a cavity inside the truck.

Lauding the success of the security forces, J&K Lt Governor Manoj Sinha said, “No outside force can derail us from our mission of peace and progress.” He visited the two injured policemen in a hospital in Jammu.