Theaterisation of armed forces next logical step in military reforms after appointment of CDS: Army chief 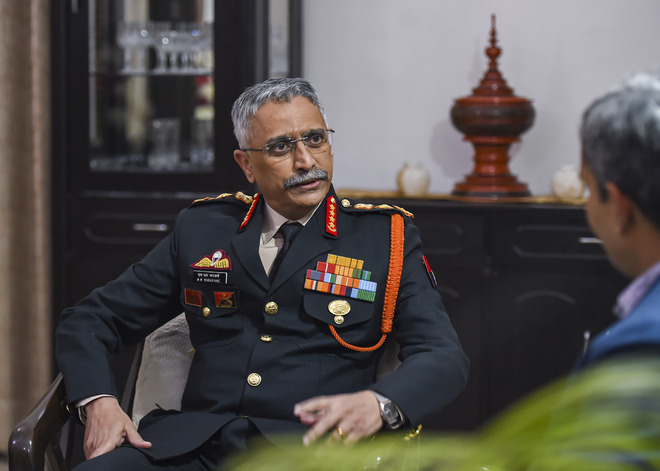 Setting up of integrated theatre commands to synergise the capabilities of the three services would be the next logical move in military reforms after the “momentous” step of appointment of the Chief of Defence Staff (CDS), Army Chief Gen MM Naravane said on Wednesday.

Asserting that the process to set up the theatre commands will be “deliberate, thoughtful and well considered”, Gen Naravane said its fruition will take a “number of years”.

Speaking at an event at the College of Defence Management in Secunderabad, the chief of the 1.3 million-strong Indian Army said there was a need for everyone to work in a spirit of togetherness and trust with the national security interests being of paramount importance.

He also added a note of caution and said that there might be a requirement for “mid course corrections,” according to a release by the Army here.

The comments by the Army chief comes at a time India has been adopting a “unified” military approach in eastern Ladakh to deal with the border row with China with the Indian Air Force working in tandem with the Army to bolster the combat capability in the high-altitude region.

Gen Naravane spoke on a number of issues concerning integration, theaterisation and modernisation of the armed forces in general and the Indian Army in particular.

He said he was optimistic about the future of integration of the armed forces, which he said was “an inevitability” as it would lead to “tri-services synergy” and optimisation of resources.

The remarks by the Army chief reflected the thinking as well as readiness of the force to support the mega theaterisation plan being undertaken by Chief of Defence Staff Gen Bipin Rawat to enhance combat capabilities of the armed forces.

Referring to the appointment of the CDS, the army chief said it was “a momentous one” and that the services needed to “demonstrate great wisdom and statesmanship” in enabling the CDS, a long standing demand of the armed forces.

“The next logical step in the process of defence reforms was the ‘formation of Integrated Theatre Commands to synergise the capabilities and combat potential of the three services during war and peace’,” the army chief was quoted as saying in the release.

Gen Naravane also spoke about the current security scenario and focused on the geo-strategic implications on capability development of the Indian Army.

The government appointed Gen Rawat as CDS on December 31 to bring in convergence among the three services and restructure military commands to effectively deal with future security challenges.

Theaterisation means putting specific number of personnel from the three services —army, navy and air force— under a common commander for a unified military approach through rationalisation of manpower and resources.

As per plan, each of the theatre commands will have units of the army, the navy and the air force, and all of them will work as a single entity looking after security challenges in a specified geographical territory under an operational commander. At present, these forces have separate commands.

In February, the CDS had said that the air defence command, to be helmed by the Indian Air Force, would be rolled out by the beginning of next year.

He had also said the proposed peninsula command, to be formed by merging the Indian Navy’s eastern and western commands, is likely to take shape by the end of 2021.

During his visit to Secunderabad, Gen Naravane also visited the Bison division where he was briefed by top commanders on security and operational preparedness of the formation.

The Army chief commended the formation for their high level of operational preparedness and exhorted all ranks to continue training hard with zeal and be prepared for any future operational challenges, the Army said.

He also visited the TATA Boeing Aerospace Limited (TBAL) at Hyderabad which is a joint venture facility of Boeing and Tata Advanced Systems. PTI