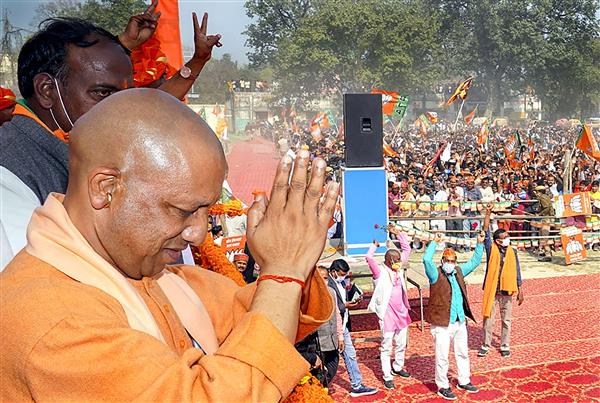 Targeting the Samajwadi party, Chief Minister Yogi Adityanath on Friday said, those who opened fire at the devotees of Lord Ram are now moving around with Lord Hanuman’s mace, alluding that the Akhilesh Yadav-led party had changed its stand.

He was referring to the 1990 incident in Ayodhya during which the police had opened fire at ‘kar sevaks’ marching towards the city, and SP chief Akhilesh Yadav raising a mace offered by supporters during the ongoing election rallies.

“Those who fired at Ram Bhakts now move around with mace of Bajrang Bali. After tasting a loss in the elections, they will appear in Ayodhya to offer ‘kar seva’ with the devotees of Lord Ram,” the chief minister said during an election rally here.

Asserting that he was confident of a victory, Adityanath said, as the results of the Assembly elections will be declared on March 10, the rival leaders had already booked tickets to move out of Uttar Pradesh the next day.

Taking a dig at the BSP, the chief minister said, “The elephant’s (party symbol) stomach was so big that it ate the entire state’s ration.” Several bulldozers with banners “Baba’s bulldozer” written on them, were stationed at the venue in Katka in a symbolic representation of Adityanath’s earlier remarks that the government will continue bulldozing illegal properties of the mafia after March 10.