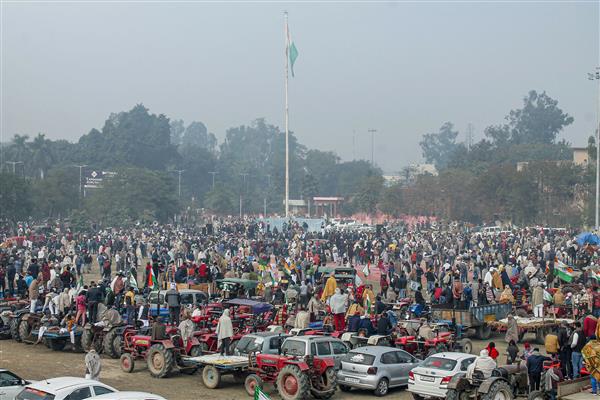 Farmers during kisan mahapanchayat against the new farm laws, in Muzaffarnagar on Friday. PTI

BKU (Tikait) spokesperson Rakesh Tikait's tears appear to have done the trick. Not only have the number of protesters at Ghazipur increased with farmers from Uttar Pradesh and neighbouring Haryana joining in, support is also growing at Singhu and Tikri despite tension and clashes.

While throughout the night on Thursday meetings in Tikait’s support were held in several villages in Haryana and Uttar Pradesh, on Friday the 'mahapanchayat' in Muzzafarnagar  decided that Ghazipur agitation would continue.

BKU president Naresh Tikat, who had earlier called off the agitation at Ghazipur, asked supporters to go and  support the protests at the Delhi-UP border.

After his (Naresh Tikat's) earlier announcement there were visible signs of  thinning of protests at Ghazipur. However sources say even though an “agreement” was reached with the Tikait brothers that the protest site will be vacated, the increase in security forces and presence of Loni MLA Nand Kishore Gujjar and his supporters "vitiated the atmosphere"

Asserting that he will not surrender and will also call more people to join the protest if needed, Rakesh Tikait on Thursday broke down saying that "he would rather commit suicide than leave and end the protest against the farm laws".

As Rakesh Tikait declared he would continue the protest at the Ghazipur border and not vacate till talks with the government were held, Naresh Tikait quickly called an emergency meeting and appealed to supporters to reach Ghaziput and scheduled a mahapachayat in Muzzafarnagar.

Sources say optics of Rakesh Tikait, a jat/kisan leader, becoming sentimental and breaking down was enough to stir emotions among his community who “collectively felt humiliated”.

“Rakesh Tikait lost badly when he contested the polls a few years back. His support base is  limited, his father is the one who commanded the following. But then 'Jats' stand by each-other in ‘dukh’ (pain). It is a typical characteristic of the community which the BJP misunderstood and turned a possible retreat into a prestige issue for them.

“The basic sentiment now is that 'BJP ne dukhi kar diya kyon ki wo Jat hai' ( BJP created problems for him because Rakesh Tikait is a Jat)".