5,000 people gather at Anand Vihar including at ISBT as well as the railway station; their numbers still rising 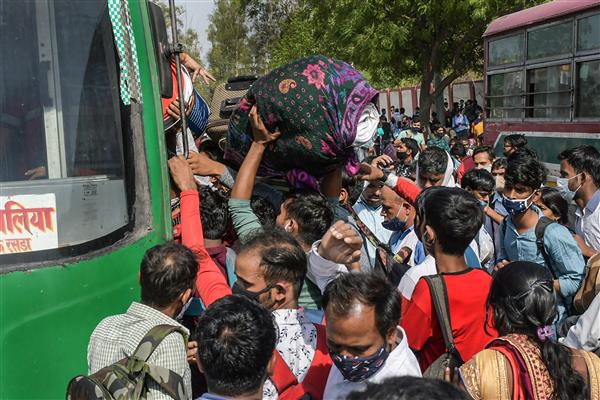 Large numbers of migrants at Kaushambi bus stand to board buses for their native place , after lockdown announcement in National Capital in the wake of rising Covid-19 cases, in New Delhi on Monday. PTI photo

Thousands of migrant workers gathered at Anand Vihar ISBT here to catch a bus home, hours after Chief Minister Arvind Kejriwal announced a week-long lockdown and appealed to them with folded hands not to leave Delhi while sounding a word of assurance—“Main hoon na” (I am here for you).

Police officials said over 5,000 people gathered at Anand Vihar including at ISBT as well as the railway station and the numbers were rising.

Earlier in the day, Kejriwal appealed to the migrant workers to not leave Delhi, saying the short period of lockdown would need not be extended.

“I assure you, the government will take full care of you. Main hun na, mujh par bharosa rakho (I am here for you, have faith in me),” Kejriwal said, announcing the lockdown from 10 PM tonight to 5 AM next Monday.

A senior police officer said after the sudden announcement of the lockdown, thousands of migrant workers thronged the ISBT Anand Vihar area.

“We have deployed maximum force here. There must be over 5,000 people here at present. Buses are limited as of now, we are guiding people as per their destination,” he said.

The police were also in talks with civil administration officials to either arrange transport for them or shelter homes for their temporary stay, the officer said.

Policemen deployed in the area were also trying to counsel the migrant workers to stay back as the lockdown was for a few days only, he added. However, migrants feared that the lockdown could be extended as the situation of COVID-19 was deteriorating by the day.

Mukesh Pratap, who works at a cloth factory in Dilsad Garden and a native of UP’s Bareilly, said he wanted to go to his home as there was a possibility of lockdown extension.

“Lockdown will definitely affect our livelihood so it is better for us to remain at our home. It may be extended also and I would not like to take a chance,” he said.

In an online briefing, the chief minister said: “I would like to appeal to them (migrants), with folded hands, this is a short lockdown of six days. Please do not leave Delhi. You would lose a lot of time, money, and energy in travelling. Stay in Delhi”.

Kejriwal said it was not an easy decision to impose lockdown because it hurt the poor people most.

“I understand how people lose their jobs and wages during the lockdown. This is especially difficult for the poor people and daily wage workers,” he said.

During the nationwide lockdown last year, a large number of migrant workers from Bihar, UP and other states living in Delhi had moved to their home states, through whatever means available and often on foot. — PTI