At some point or the other, all parties have used Netaji's name and legacy to consolidate position among the Bengali middle class in his home state, Bengal 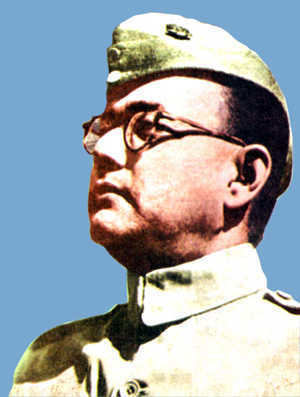 Today is the birth anniversary of freedom fighter Netaji Subhash Chandra Bose and as expected the ruling Trinamool Congress in West Bengal and the BJP are again at loggerheads over his legacy and contribution to India’s freedom struggle.

Sarsanghchalak Mohan Bhagwat is in Kolkata to pay tributes which, the TMC and Left parties claim, is keeping in mind the political gains for the BJP.

Netaji and BJP versus TMC

The pan-India popularity of Netaji, whose death and its circumstances continue to be debated, is also something no one can deny and which all parties, including those having a say in Bengal politics, have become increasingly possessive of.

Meanwhile, the BJP also claims that because of the Congress, Netaji was denied his rightful place in Indian history, which PM Modi and the RSS are trying to rectify.

This is also not the first time political outfits have engaged with Netaji.

At some point or the other, all parties have used his name and legacy to consolidate position among the Bengali middle class in his home state, Bengal.

The fight intensified after the BJP assumed power at the Centre and started increasing political footprint in the state—a Left and TMC bastion.

In the run-up to the 2021 West Bengal Assembly election, the BJP-led Centre announced that his birth anniversary would be observed as Parakaram Diwas.

The PM also attended an event to celebrate the day at the Victoria Memorial.

Last year, Chief Minister Mamata Banerjee cried foul over the decision to drop the state’s proposed Republic Day tableau to commemorate the contributions of Bose and his army.

Later in the year, the PM unveiled the statue of Bose at the India Gate.

Somewhere around 2015, the TMC government released 64 Netaji files held by the home department.

The next year, the Narendra Modi government at the Centre released 100 files on him.

TMC and Left leaders claim that the ideologies of Netaji and the RSS were poles apart. The RSS praised Syama Prasad Mookerjee, someone Netaji was against.

Senior TMC leader Saugata Roy, however, says the Sangh differs from Netaji’s idea of India and also that the RSS did not participate in the freedom struggle in a “big way”.

While first president Keshav Baliram Hedgewar was a freedom fighter, after MS Golwalkar took over the stance differed. “Netaji stood for a secular India, which the RSS is not committed to,” he was quoted as saying.

TMC spokesperson Jai Prakash Majumdar was also quoted as saying that “Netaji never liked the ideology of the Sangh”.

“Everyone knows about the incident when Savarkar expressed a desire to meet Netaji in the jail, but Netaji refused,” he claimed.

Though according to RSS functionaries, it is “incorrect” to say that Bose was “critical of the RSS” as there is nothing to refer to that.

Highlighting Netaji’s relation with Hedgewar, they said that both believed that a disciplined organisation inspired by national ideology was the only way to India’s freedom and independence; one led the RSS and the other the Azad Hind Fauj.

Meanwhile, agencies quoted Netaji’s daughter Anita Bose-Pfaff saying that the RSS event was to “partially exploit” his legacy and that the RSS’ ideology and her father’s ideas of secularism and inclusiveness were “poles apart and do not coincide”.

“As far as ideology goes, Congress has a lot more in common with Netaji than any other party in the country. The BJP and RSS do not reflect the idea of respecting all religions as preached by Netaji, who was a devout Hindu but believed in respecting other faiths. He was in favour of a productive cooperation between members of different religions,” she said.

On whether Netaji was critical of the RSS, Bose-Pfaff said she does not have any quote to say that though he may have made critical statements about RSS members. “I know what his views are and about the RSS. The two value systems do not coincide. The RSS and Netaji’s ideology of secularism do not coincide with each other,” she said, according to agency reports.