Reacting to the development, the TMC said it is a 'good riddance' 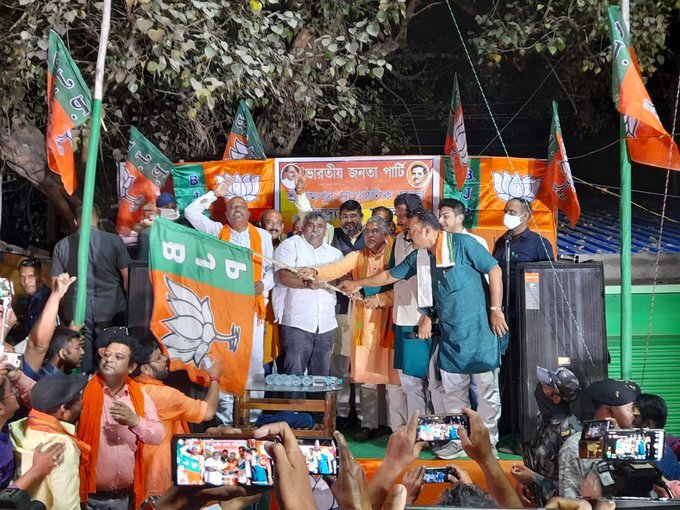 Amid an ongoing exodus from the ruling Trinamool Congress ahead of the West Bengal Assembly elections, two-time party MLA from Pandabeswar in Paschim Barddhaman district and former Asansol mayor, Jitendra Tiwari joined the BJP on Tuesday.

Reacting to the development, the TMC said it is a “good riddance”.

Tiwari, who had rebelled against the TMC leadership but had mellowed down after the BJP declined to induct him into the party in December last year, joined the saffron camp in the presence of party state chief Dilip Ghosh at a programme in Sreerampur in Hooghly district.

“I have joined the BJP as I want to work for the development of the state. In TMC, it was no longer possible to work for the party,” he said after joining the saffron party.

Welcoming Tiwari into the party, Ghosh said senior TMC leaders joining the BJP reflect that the days of the Trinamool Congress government in West Bengal are numbered.

“Earlier, we hardly had any presence in West Bengal.

But now, we have grown by leaps and bounds,” he said.

Union minister and Asansol MP Babul Supriyo, who had opposed Tiwari’s entry into the party in December last year, said he couldn’t oppose if someone is willing to work under the leadership of Prime Minister Narendra Modi.

“Yes, it is true that we had fought hard in Asansol. When Jitendra was the TMC district chief, our main fight was against him in Asansol. But now, if he is willing to join our party, I can’t oppose it. We will work together,” he told reporters.

Basu and Paul were issued show-cause notices by the party for openly speaking on the issue.

Tiwari had resigned from the post of the chairman of the Board of Administrators of the Asansol Municipal Corporation and the TMC district chief in December last year.

He had also held a meeting with Suvendu Adhikari, just two days ahead of the former state minister’s switch to the saffron party in December.

Tiwari had then made a U-turn, apologised to the TMC leadership, and returned to the party fold.

Although the TMC took him back, it clipped his wings and never gave him any important assignments.

“It’s good riddance that he (Tiwari) has left. But let me say one thing: Those who have switched over will regret their decision after the elections,” TMC secretary-general Partha Chatterjee said.

Elections to the 294-member state assembly will be held in eight phases from March 27 to April 29. —PTI