To counter China, Indian Army all set to modernise artillery : The Tribune India 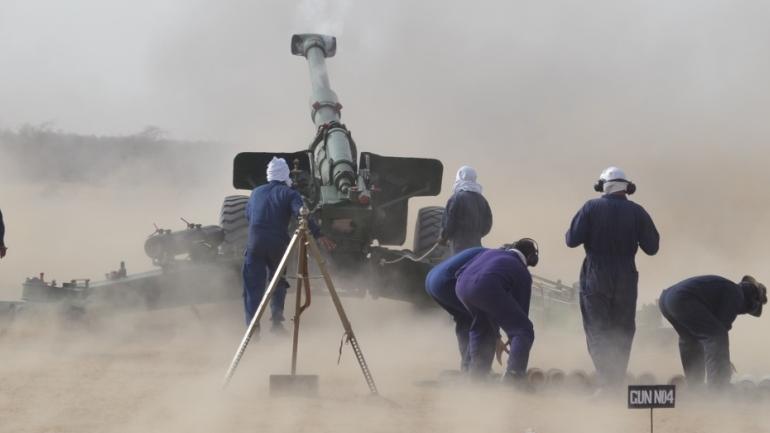 Three regiments-- each has 18 guns -- of the Sharang inducted one more on the way. Tribune photo

As part of Indian Army’s artillery modernisation project, additions are being made that will counter China in the Himalayas. This includes longer range of rockets, loitering ammunition, UAVs with greater endurance besides newer indigenous guns.

Defence Minister Rajnath Singh on Tuesday asked the Indian defence industry to identify and manufacture state-of-the-art technologies. He was addressing the fifth annual session of the Society of Indian Defence Manufacturers.

Last year, on emergency procurement basis, the Ministry of Defence approved purchase of loitering ammunition for the Army. These are set to be delivered now. Loitering ammunition can remain in the air for a specified period, do surveillance of targets and strike when directed from the ground.

Among the multiple types of guns being inducted are Advanced Towed Artillery Gun System (ATAGS), Sharang, ULH, Vajra and Dhanush. On ATAGS, sources said: “The firing trials went off well. The field evaluation trials have been completed.” Tata and Bharat Forge, the two manufacturers of the DRDO-designed gun are ready.

The Ultra Light Howitzers – 145 imported from the US—are being inducted steadily. Seven regiments — 18 guns in each — of ULH have been inducted and deployed in the northern sector.

Sharang – the 130 mm gun that is being up-gunned to 155 mm – has three operational regiments and one more is on the way.

The success of the K9 Vajra gun – that runs of tank-style  tracks-- in eastern Ladakh has led the MoD to okay purchase of 100 more such guns. Originally the gun was made for deserts, its adaption for Himalayan winter includes batteries that work in cold and lubricants that don’t freeze.

On Dhanush Gun, sources said the first regiment is deployed, the second one is expected by March 2023.

The future of long artillery includes long range rockets. A 75 kms range guided rocket from Pinaka launcher is to be inducted. The multi-barrel  ‘Smerch’ can fire for 90 kms range. The DRDO has been asked to work at rocket that can fire 125 kms.

With long-range rockets being inducted, ariel surveillance is needed to find targets. The Army is looking for vertically launched drones with 80 kms range. The system will direct fire in enemy areas including in beyond visual range.

The Army’s artillery modernisation has ambitious needs. Called the Field Artillery Rationalization Plan, and drawn up in 1999, it talks about acquiring 2,800 guns by 2027.  Meeting these numbers could take upto a decade or more from now.