Approves procurement of additional 60 sprayers from UK, drones to be deployed soon 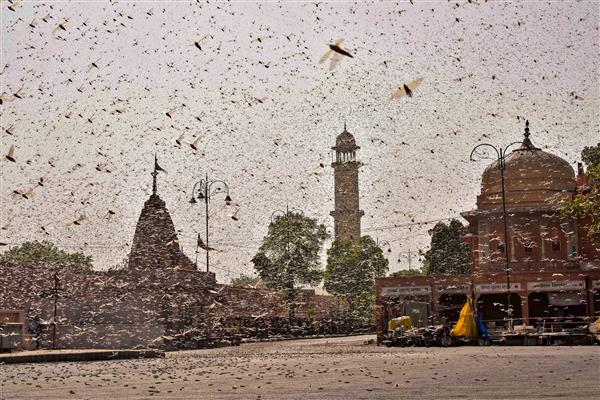 Swarms of locust in the walled city of Jaipur on Monday. PTI

With locust swarms sweeping western and northwestern parts of the country, the Union Agriculture Ministry on Wednesday stepped up efforts to control the pests in Rajasthan, Punjab, Gujarat and Madhya Pradesh.

At present, active swarms of immature locust are in Barmer, Jodhpur, Nagaur, Bikaner, Sri Ganganagar, Hanumangarh, Sikar and Jaipur districts of Rajasthan and Satna, Gwalior, Seedhi, Rajgarh, Baitul, Devas, Agar and Malwa districts of Madhya Pradesh, according to an official statement by the ministry.

Around 200 Locust Circle Offices (LCO) are currently conducting survey and control operations in close coordination with the district administration and agriculture field officials in the affected states.

Twenty-one districts in Rajasthan, 18 in Madhya Pradesh, one in Punjab and two in Gujarat have already undertaken locust control measures.

For effective control of locusts beyond scheduled desert areas, temporary control camps have been established in Ajmer, Chittorgarh and Dausa in Rajasthan; Mandsaur, Ujjain and Shivpuri in Madhya Pradesh and Jhansi in Uttar Pradesh.

Union Agriculture Minister Narendra Singh Tomar has approved procurement of additional 60 sprayers from the UK. Drones are also to be deployed soon.

Till May 26, control operations against locusts were undertaken on 47,308 hectares across 303 places in Rajasthan, Punjab, Gujarat and Madhya Pradesh by LCOs in coordination with district administration and state agriculture departments.

As many as 89 fire brigades for pesticide spray; 120 survey vehicles; 47 control vehicles with spray equipments and 810 tractor mounted sprayers have been deployed for effective locust control, as per the statement.