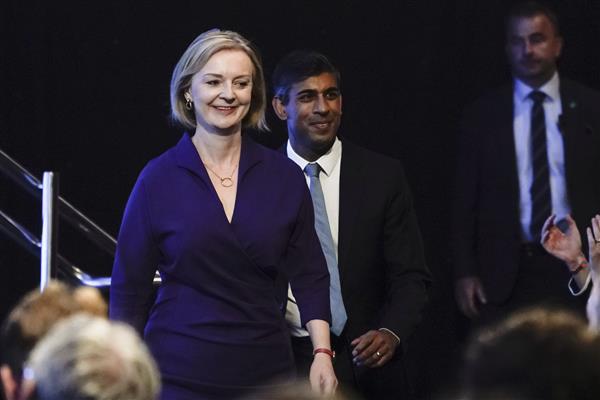 Liz Truss and Rishi Sunak arrive for the announcement of the result of the Conservative Party leadership contest at Queen Elizabeth II Centre in London. AP/PTI

After winning the race, the UK PM-elect tweeted she would “take bold action to get all of us through these tough times, grow our economy, and unleash the United Kingdom’s potential”.

On Tuesday afternoon, Truss will formally lay claim to her new office after her predecessor Boris Johnson hands over his formal resignation to the Queen. It will be followed by Truss’ first audience as PM-elect with the 96-year-old Queen after which she will give an inaugural speech at 10, Downing Street, and then will come the announcement of her new Cabinet team.

How the Tories voted

Conservatives are one family, time to unite behind Truss. — Rishi Sunak after defeat

Confident ties will be strengthened

Congratulations @trussliz for being chosen to be the next PM of the UK. Confident that under your leadership, the India-UK comprehensive strategic partnership will be further strengthened. — Narendra Modi, PM

After winning all five rounds of voting among Conservative Party MPs, Sunak’s bid to create history by becoming the first person of Indian heritage to become UK PM sank at the final hurdle.

The 47-year-old Truss was widely expected to become Britain’s third female PM, but it was not the landslide anticipated by some pollsters and the media. Sunak finally received 60,399 votes as against 81,326 by Truss, whose loyalty to outgoing PM Boris Johnson may have tilted the balance.

A former Chancellor of the Exchequer, Sunak, 42, emerged as a graceful loser and thanked everyone who voted for him in the campaign. In her acceptance speech, Truss declared: “I will deliver on the energy crisis, dealing with people’s energy bills, and also dealing with the long-term issues we have on energy supply.”

She was also confident of leading the Tories in the 2024 general elections which indicated that she may not be in favour of snap polls.

The time to deliver for Truss is imminent as Britain has the highest inflation rate among G-7 and the economy could be on the brink of recession.

The result was formally announced by the returning officer of the leadership contest and chair of the Conservative Party’s 1922 Committee of backbench MPs, Sir Graham Brady, at the Queen Elizabeth II Centre near Downing Street in London.