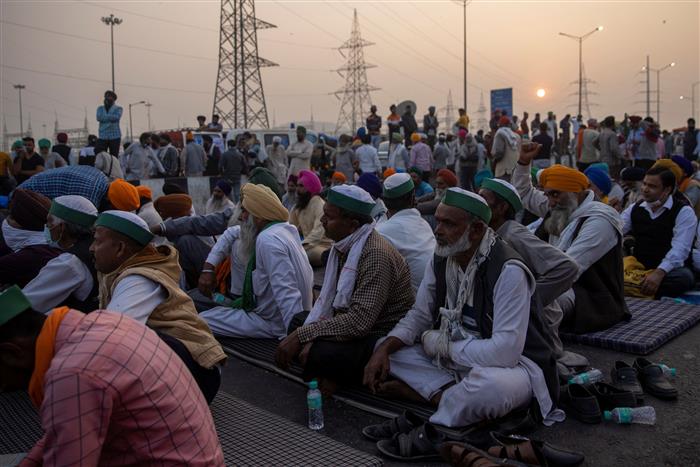 Farmers listen to a speaker on a blocked highway as they attend a protest against the newly passed farm Bills at the Delhi-Uttar Pradesh border in Ghaziabad. Reuters

A joint platform of central trade unions on Friday reiterated its support to the farmers' agitation, saying that the Bharat Bandh call by them on December 8 was successful.

Despite the bandh call, the unions had not gone on strike on December 8, and they lent their moral support to the farmers' agitation against three new farm bills.

"The Joint Platform of Central Trade Unions reiterate rock-like solidarity with the Farmers' United Struggle. After the successful Bharat Bandh on 8th December called by the Farmers jointly, the Central Government cannot call this a 'Punjab question' any more," a statement by joint forum said.

They also said that the invitation by Home Minister Amit Shah to the farmers' representatives from Punjab as well as from other states, is an acceptance of this fact.

"The Joint Platform of Central Trade Unions and Independent Sectoral Federations/Associations are closely following the machinations of the Centre, such as planting alleged NIA (national investigation agency) reports of instigation by SFJ (Sikhs for Justice) from Canada, alleged letter bearing lakhs of signatures of the Haryana farmers backing the agri-laws, offer to amend laws and many other such deceitful diversionary tactics have failed to make any headway against the demand to repeal the three agri-laws that itself has become a material force," it added.

"We have once again received a letter from the Samyukta Morcha of Kisans for their appreciation of continued support from the Central Trade Union organisations for their justified struggle. They have informed us the next phase of their action programmes with request to extend support," it said.

"They will also boycott the products of Ambani and Adani like Jio, Reliance Malls, Adani Fresh etc," it added.

The Joint Platform of CTUs and Sectoral Federations/Associations call upon the workers, employees and their unions, irrespective of affiliations, to be ever vigilant and extend our active solidarity to the call of Farmers' Joint Struggle in the coming crucial period, the unions have said. — PTI