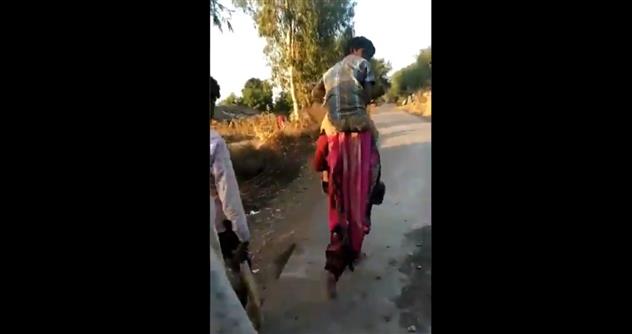 A pregnant woman was forced to carry a child on her shoulder for three kilometres barefoot by her in-laws in Madhya Pradesh's Guna district. The police have registered a case after the video of this incident went viral on social media.

According to information, the woman was forced to walk for three kilometres with a child on her shoulder by her in-laws after her husband left for Indore leaving her at the home of another man. She is a resident of Banskhedi village in the district.

The woman said that her husband Sitaram left her at the house of a man named Dema, a resident of Sangai village. Thereafter, her father-in-law and brother-in-law came and asked her to come home. But when the woman refused to go with them, they allegedly thrashed her. The accused also forced her to walk till Banskhedi village with a child on her shoulder.

The incident came to light on Monday when a video went viral on the social media, while the incident happened around 10 days back, the police said, adding that three people have been arrested so far while a search is on for the fourth one.

Former Madhya Pradesh Chief Minister and Congress State President Kamal Nath said, "The incident involving a pregnant woman in Banskhedi village of Guna district in the state is quite embarrassing and shames humanity and mankind. A procession was carried out in which the woman carrying a child on her shoulder was forced to walk barefoot and was beaten mercilessly with sticks along the way." Kamal Nath also said, "Shivraj ji (referring to the current Chief Minister Shivraj Singh Chouhan), in which state are we living, is this your good governance? How inhuman behaviour is this with a woman? A procession was carried out involving the woman and no one came forward to stop it? Where was your police administration sleeping?" The former Chief Minister has demanded the harshest possible action against the accused and also urged action against the officers found guilty of negligence in this serious matter.

Kamal Nath said that the woman should be given complete security and the government should bear the expenses of her treatment. She should also be provided all possible help. — IANS