Erdogan, in his pre-recorded video statement to the General Debate at the 75th session of the UN General Assembly, made a reference to Jammu and Kashmir 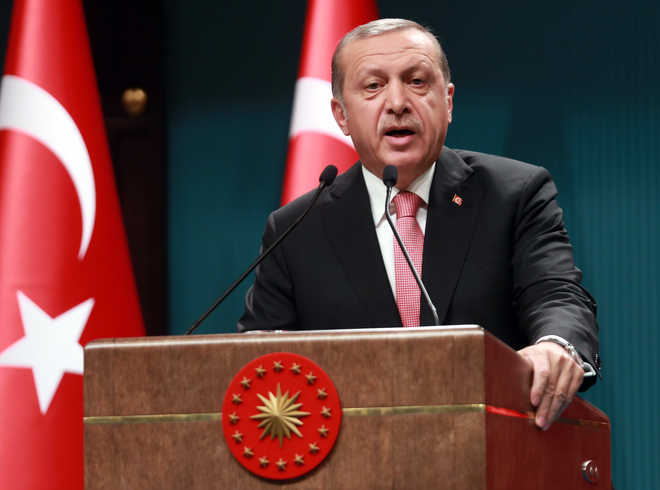 Speaking at the high level segment of the UNGA, Erdogan did not name India but criticised the situation in Kashmir after the August 5, 2019, change in status and the lockdown.

India’s Permanent Representative in the UN TS Tirumurti hit back by describing his remarks as “gross interference in India’s internal affairs” and said they were “completely unacceptable”.

Turkey, he said, should learn to respect the sovereignty of other nations and reflect on its own policies more deeply.

Turkey under Erdogan has been engaged in a brutal crackdown on the minority Kurds, denies the Armenian genocide and recently converted a museum into a mosque, drawing condemnation from around the world.

Erdogan had even hinted at a plebiscite which is a red rag to India by observing that “we are in favour of solving this issue through dialogue within the framework of UN resolutions, especially in line with the expectations of the people of Kashmir”.

However, the relevant UNSC resolution asks Pakistan to first remove its troops and personnel from the region.

Erdogan rubbed a few more countries the wrong way in his speech and in case of Armenia and Azerbaijan, even named them. Last year at the same event Pakistan and Malaysian prime ministers besides Erdogan had touched on the Kashmir issue.

Prime Minister Narendra Modi showed United Nations the mirror and urged it to take a long, hard look at its “crisis of confidence” while ratcheting up the call for a new template of multilateralism that “reflects today’s realities” on Day One of the United Nations high-level week being live-streamed to the world from the UN headquarters in New York City.

Meanwhile, PM Modi renewed his call for reforming the UN’s structures during a four-minute video address.

“We cannot fight today’s challenges with outdated structures and without comprehensive reforms. The UN faces a crisis of confidence,” he said in a pre-recorded message.

“For today’s interconnected world, we need a reformed multilateralism that reflects today’s realities, gives voice to all stakeholders, addresses contemporary challenges and focuses on human welfare,” he added.

The PM was speaking at a special session to commemorate UNGA’s 75th anniversary. He will make a substantial address at the UNGA on Saturday.

The high level segment of the UNGA will see a record number of world leaders delivering their addresses via pre-recorded video tapes. In normal times, many of them would have deputed their Permanent Representatives at the UN or ministers to speak on their nation’s behalf.