Twitter suspends over 500 accounts a day after Delhi violence

Says it has suspended platforms that violated its rules 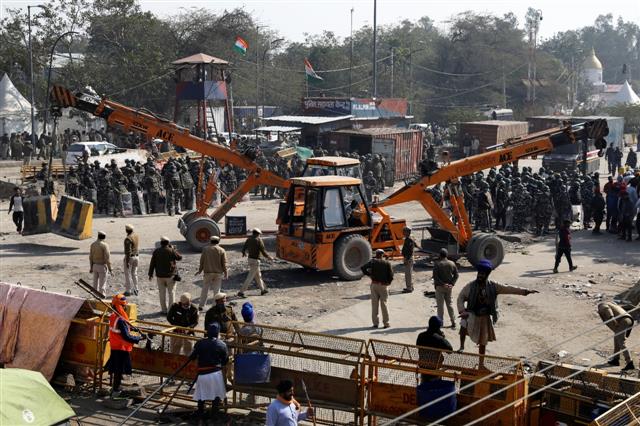 Police officers put barricades with the help of cranes at the site of a protest where farmers are protesting against farm laws at Singhu border in New Delhi on Wednesday. Reuters photo

Twitter said on Wednesday it has suspended over 500 accounts a day after violence marred a tractor rally in the national capital held to mark a farmers' protest against three controversial agriculture laws.

Twitter said it had suspended users engaging in "spam and platform manipulation".

“We have taken action on hundreds of accounts and tweets found violating our rules,” a spokesperson said.

Several protesters defied a preset route for the protest that farmers unions had called on Republic Day, tore down police barricades, and clashed with police at several places in the national capital, and also breached the iconic Red Fort, considered a symbol of sovereign India which hosts Independence Day celebrations every year.

At least one person is reported to have died in connection with Tuesday's events---a protester who police claimed was killed after his speeding tractor turned turtle near ITO. Police claim several policemen were wounded in the violence.

Several union leaders had all condemned the violence.

Union leaders fear that the protests have jeopardised the movement, and are currently holding a meeting to review its decision on a march that they had planned to Parliament on February 1---the day the central government will table its budget.