The manuscript was assembled for Shah Jahan’s son 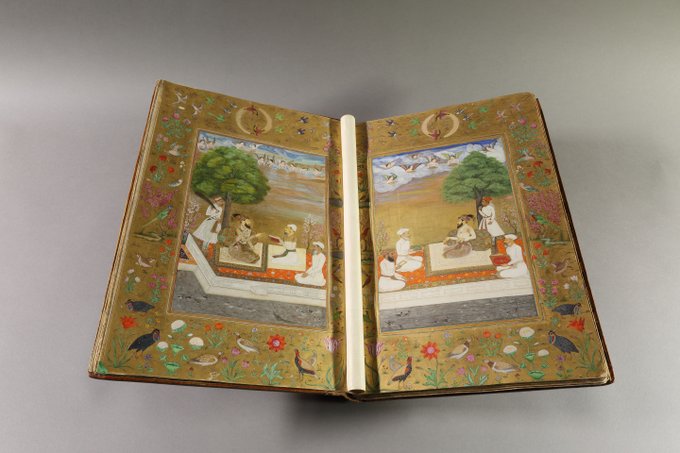 The UK’s renowned Bodleian Libraries at the University of Oxford is focussing its annual fundraising drive on rare manuscripts this year, with a 17th century Mughal miniature collection from India at the heart of the conservation efforts.

Known as ‘The Douce Album’, the manuscript of exquisite miniature paintings and calligraphy was assembled for a member of the imperial family of Shah Shuja, the second son of the Mughal emperor Shah Jahan and wife Mumtaz Mahal – most famous for the Taj Mahal in Agra.

It is described as an album of unrivalled artistic quality from an age that represented the high point of the Mughal dynasty and contains a varied collection of 41 of the highest-quality miniature paintings and exquisite calligraphy within a contemporary lacquered binding.

The Bodleian hopes to raise between GBP 40,000 and 50,000 as part of its Annual Fund campaign to go towards the conservation of Bodleian’s historic manuscript collection, including the album.

“Since its creation for a Mughal prince in the 17th century, this unique album’s exquisite art works and calligraphy have continued to be viewed, admired and studied,” said Hannah Litvack, Development Officer at the Bodleian Libraries.

“After four centuries of handling, its condition has become a cause of concern with evidence, amongst other things, of flaking paint and broken sewing threads, which cause the text-block to ‘slide’ every time the album is browsed and closed.

“We need to conduct a full assessment to investigate the condition of the paint layer, the lacquered binding, the sewing structure and the paper substrate,” Litvack explains.

This will be followed by conservation treatments to stabilise all the parts in order to safeguard the treasure from the Mughal court, bequeathed to the Bodleian Libraries in 1834 by distinguished antiquary and bibliophile Francis Douce.

It was designed for royal viewing and represents the work of some of the finest artists and calligraphers of the time.

According to the library, the album has long been the subject of study by art historians and, because of its beauty and provenance, it is frequently requested for major exhibitions.

Alongside the pages of calligraphy in beautiful Nasta’liq script bordered by palmate and floriate designs in lapis and gold, most of which are signed by the master calligrapher Mir Ali of Herat, are intricate pictures executed in opaque watercolour and gold with some showing scenes from the Persian epic ‘Shahnamah’.

The Mughal court’s fascination with Western art is also expressed in other paintings in the album, which employ Western motifs including a portrait of St. Matthew, and another of the Virgin Mary.

“Conservation of and access to these manuscripts is key to the Bodleian’s mission. The scope of our work is huge: we conserve thousands of collection items yearly, host increasing numbers of scholars who wish to carry out research on them, and display them in around 15 different exhibitions for over 60,000 visitors each year,” said Librarian Richard Ovenden in his fundraising appeal.

“The Bodleian Libraries are seeking donations from people who share its commitment to preserving and understanding the rich, illuminating history bequeathed to the present from the past,” he said. —PTI