Around 22,500 Indians had already been rescued, the EAM informed Rajya Sabha 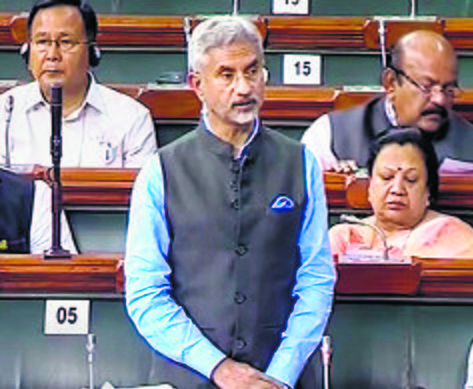 External Affairs Minister (EAM) S Jaishankar has dismissed charges of delay in evacuating Indian nationals from war-torn Ukraine, as he informed the Rajya Sabha today that the Indian Embassy in Ukraine had started a registration drive for Indian nationals in January itself in view of the increasing tension between Russia and Ukraine.

A majority of students, most of them Indians, chose to stay back because they feared their education would be hit if they left. S Jaishankar, External Affairs Minister

Around 20,000 Indian nationals registered with the embassy, he said.

“The embassy issued an advisory on February 15 and, by February 23, around 4,000 Indians had left Ukraine. However, a majority of students, most of them Indians, chose to stay back because they feared that their education would be in jeopardy if they left. Some universities also actively discouraged students from leaving,” Jaishankar said.

The EAM said propaganda in Ukrainian media and statements from Ukrainian politicians, including President Volodymyr Zelenskyy, regarding force withdrawals added to the confusion of students.

When the Russian shelling started on February 24, “18,000 Indian citizens were caught in the midst of a conflict”, Jaishankar said.

The Indian community was dispersed across Ukraine posing its own logistical challenges. The evacuation exercise “Operation Ganga” was launched when military action, including air strikes and shelling, was underway.

“In all, 90 flights — 76 civilian and 14 Indian Air Force flights — were pressed into service under ‘Operation Ganga’. The flights were operated from Romania, Poland, Hungary and Slovakia. While the IAF rose to the occasion, private carriers also participated in the operation enthusiastically, Jaishankar noted.

“Operation Ganga is a testimony to the government’s commitment evacuate Indians stuck in distress situations abroad. We have shown this on numerous occasions before, but rarely a situation as challenging as the ongoing conflict in Ukraine has emerged,” Jaishankar said, adding 22,500 Indians had already been rescued.

A small number of Indian were still stuck in Ukraine and effort was on to rescue them through the “Russian route”, Jaishankar said.