Trade Unions are demanding cash transfer of Rs 7,500 per month for all non-income tax paying families, 10 kg free ration per person per month to all needy and 200 days' work under MGNREGA 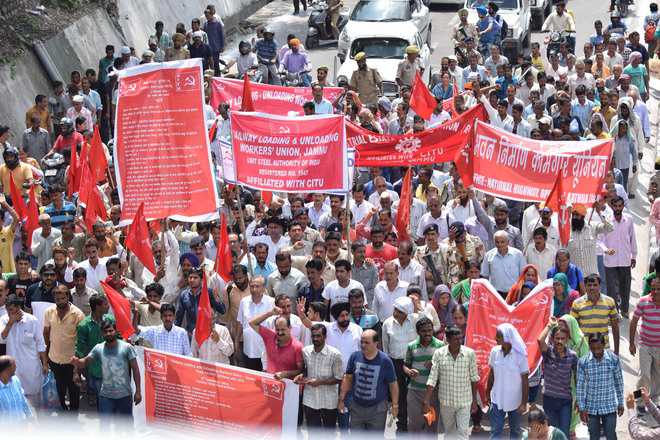 Members of 10 central trade unions have decided to come on streets on November 26 for 'chakka jam'. File Photo

Central trade unions on Tuesday said that about 25 crore workers were expected to participate in the nationwide general strike on November 26, for which "preparations are in full swing".

"Preparations are in full swing for 26th November all-India strike. We expect more than 25 crore workers to take part in the strike this time," said the joint forum.

Meanwhile, BJP aligned Bharatiya Mazdoor Sangh (BMS) has clarified that it would not participate in this strike.

In a statement issued on Tuesday, the BMS said, "It is clarified that BMS and its units will not participate in this politically motivated strike on 26th November 2020."

The representatives of the 10 central trade unions expressed satisfaction about the preparations of nationwide general strike on November 26, 2020 in a joint press conference held here.

The independent sectoral federations and associations in the Central and state government employees and in the public sector enterprises have served the strike notice in most of the places, similarly the industrial units in the private sector, big and small, also have submitted notices to this effect in most part of the country, read the joint statement.

The auto and taxi drivers have also decided to keep off the roads in many states. The federations of Railways and Defence employees have decided for large mobilisation on the day to express their solidarity with this strike action and the demands of the unions, the statement added.

The united front of the Kisan organisations in India named as AIKSCC has extended its support to the general strike of workers and would be mobilising in rural India to express solidarity with the workers.

The trade unions have also extended their support to the 'Parliament Chalo' march of 26-27 November by AIKSCC, the umbrella organisation of Indian farmers,  along with the mobilisation of workers all over India to stand with farmers against the agriculture laws.

The demands of the strike include cash transfer of Rs 7,500 per month for all non-income tax paying families and 10 kg free ration per person per month to all needy.

They have asked the government to withdraw all "anti-farmer laws and anti-worker labour codes and stop privatisation of public sector including the financial sector and stop corporatisation of government-run manufacturing and service entities like railways, ordinance factories, ports etc."

They also stressed in their demand to withdraw the "draconian circular on forced premature retirement of government and PSU employees".

The unions have also put forth other demands that include 'pension to all', scrapping NPS (National Pension System) and restoration of earlier pension with improvement in EPS-95 (Employees' Pension Scheme-1995 run by retirement fund body EPFO). PTI