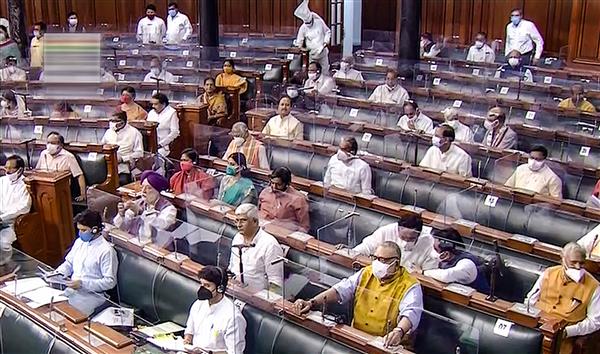 The Lok Sabha in session on Thursday. PTI

Tempers ran high in the Lok Sabha on Thursday morning with the government asking the opposition whether it wanted to apologise for the misconduct of MPs in the House on Wednesday when bundles of papers were flung at ministers and the chair of the presiding officer.

Seconds after the Lok Sabha Speaker urged all members to work collectively to raise the dignity of the House and avoid actions that are unbecoming of parliamentary conduct, Leader of Congress in Lok Sabha Adhir Ranjan Chowdhury said the opposition was unable to speak in the House due to “arrogance of the government”.

At this Parliamentary Affairs Minister Pralhad Joshi rose in his seat and in a rather shrill tone asked Adhir, “Talk about yesterday’s events. Three bundles of papers were flung at the chair, at us, at the media. Is this right or wrong? You don’t even want to apologise? Is this the way to behave?”

Earlier, the Speaker said the House would have to collectively decide how to preserve its majesty.

“Indian Parliament is accountable to people. You are not just individuals, you are institutions. If you feel right, let’s together decide to work on ways to raise the dignity of the House.

Some MPs are repeating unparliamentary acts, acts that undermine dignity of the House. If this doesn’t stop I would need your help to act against such MPs,” said the Speaker.

Earlier, the Government asked the Speaker for action against the errant MPs unless they apologised.

Adhir, however, said, “To maintain dignity of the House all parties are cooperating and because of that you are able to talk of parliamentary dignity. We have made a record of productivity of the House under your chairmanship. You are seeing that due to arrogance of the government we are unable to speak in the House.”

The government told the opposition to keep matters of agenda separate for discussion in the business advisory panel and take responsibility for their conduct on Wednesday.