UP polls: Campaigning for sixth phase ends : The Tribune India 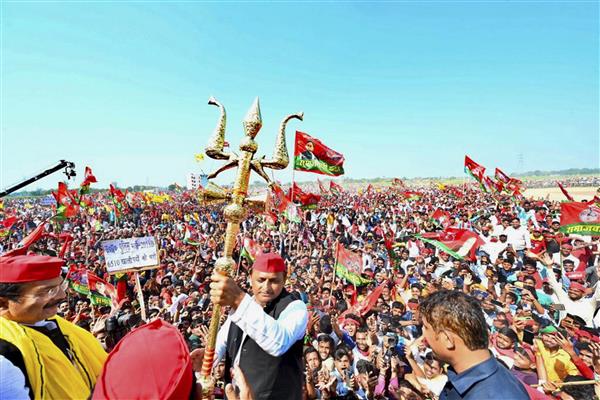 Samajwadi Party President Akhilesh Yadav during an election campaign rally for the ongoing UP Assembly elections, in Ballia on Tuesday. PTI photo

Campaigning for the sixth phase of polling for 57 assembly seats in Uttar Pradesh, including Gorakhpur Urban from where Chief Minister Adityanath is in the fray, came to an end on Tuesday evening.

State Chief Electoral Officer Ajay Kumar Shukla said the campaign for the sixth phase ended at 6 pm and all preparations for voting on Thursday have been completed.

Prominent among the 676 candidates in the fray in this phase are Adityanath, who is contesting his first assembly election, state Congress president Ajay Kumar Lallu (Tamkuhi Raj), Swami Prasad Maurya, who quit as minister to join the Samajwadi Party (Fazilnagar), and Leader of Opposition in the state assembly and senior Samajwadi Party leader Ram Govind Chaudhary (Bansdih).

The Samajwadi Party (SP) has fielded the wife of late Upendra Dutt Shukla, a former BJP leader, against Adityanath.

Surendra Singh, the sitting MLA from Bairia in Ballia, who joined the VIP, a new entrant in Uttar Pradesh’s electoral politics, after being denied a ticket by the BJP, will also be facing the electorate in this phase.

Prime Minister Modi had attacked the BJP’s rivals by tagging them as ‘ghor pariwarvadi’ (staunch dynasts) who, he said, can never make India capable or Uttar Pradesh empowered.

Congress general secretary Priyanka Gandhi rebutted by saying that BJP was only against her family, which has not bowed down to the saffron party.

SP chief Yadav, during campaigning on these seats, had accused the BJP of hatching a conspiracy of ending reservation and selling government organisations to the private sector.

There are a total of over 2.14 crore voters in this phase.