Pathak claims her morphed pictures were being circulated on Twitter by an account, which has the name and profile picture of Bhojpuri superstar-turned BJP MP Ravi Kishan 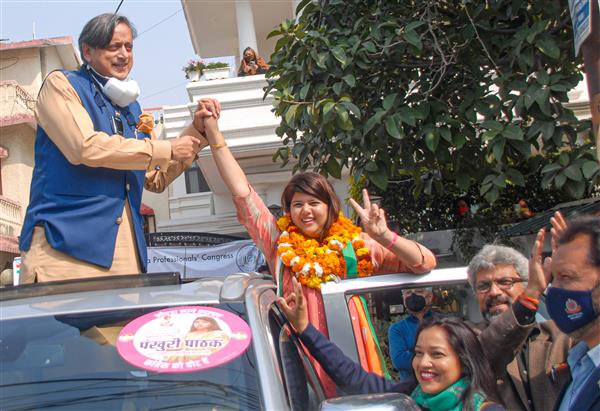 Pankhuri Pathak, one of the star campaigners of the Congress for ongoing Uttar Pradesh assembly polls, on Tuesday claimed online harassment and extortion bid, prompting the Noida police to launch a probe.

Pathak said her morphed pictures were being circulated on Twitter by an account, which has the name and profile picture of Bhojpuri superstar-turned BJP MP Ravi Kishan.

The person behind the Twitter handle demanded Rs 1 lakh to stop circulating the morphed pictures of Pathak, who is also the Congress’s candidate for Uttar Pradesh assembly from Noida in Gautam Buddh Nagar and vice chairman of party’s state social media committee.

Police officials said they have received a complaint from the Congress leader and investigation has been taken up.

“The harassment began the next day of polls in Noida (February 10) when I started getting obscene comments from hundreds of Twitter accounts. I blocked several of those accounts but there were far too many of them,” she said.

“One of the accounts in the name of Ravi Kishan had been putting out my morphed pictures and then shared details of a bank account in comments and demanded Rs 1 lakh to stop posting it further,” Pathak, who was in Tundla, Firozabad for a poll campaign on Tuesday, told PTI.

In one of the tweets, she said, “My morphed imaged were tweeted by this handle (@ravikishan0545) today. There are thousands of such handles run by the BJP IT Cell that are sexually harassing Indian women on Twitter.”

She also sought action against such accounts from Twitter.

Deputy Commissioner of Police (Women and Child Safety) Vrinda Shukla said the police have received the complaint and the Cyber Cell has started work on it.

“We treat such complaints with great urgency and hope to detect the culprit at the earliest,” Shukla told PTI.

Meanwhile, a police official said in the evening that Pathak’s complaint has been received and probe has been launched in the case.

The case has been filed under provisions of the Information Technology Act and the police are trying to trace location of the miscreants, the official said.