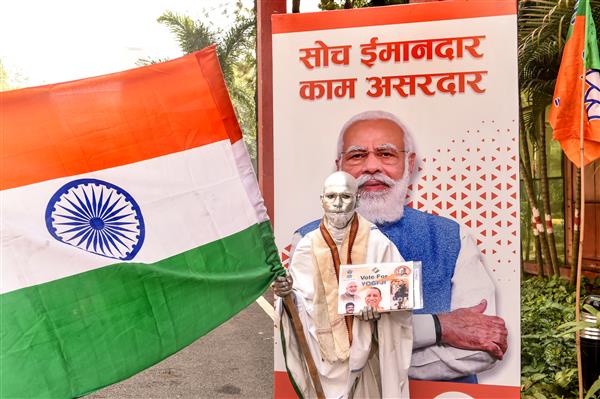 Mohan Mahapatra, a 27-year-old man with his body painted in silver and dressed up as Mahatma Gandhi, waves the national flag as he campaigns for BJP for the Uttar Pradesh Assembly polls, in Lucknow. PTI

Body painted in silver and dressed up as Mahatma Gandhi, this 27-year-old man, popular as “Silver Gandhi”, is drawing crowd while campaigning for the BJP in Uttar Pradesh.

Mohan Mahapatra, also known as “Sai Ram Gandhi”, has in the past travelled across seven states of India on foot spreading the message of Swachh Bharat Abhiyan. He has now arrived in Uttar Pradesh to “ensure the victory of the BJP”, he says.

The 27-year-old man from Odisha says he is rooting for the saffron party because he is “inspired by Prime Minister Narendra Modi, his ideology and his policies such as the Swachh Bharat Abhiyan”.

Mahapatra says he first set out on this journey in 2016 using the money his mother gave him after selling her earrings. He says he does not charge money from anyone and does it out of his own will.

He reached Lucknow, the state capital, on February 8 -- the day the BJP released its manifesto for the Uttar Pradesh polls. After meeting Home Minister Amit Shah, Chief Minister Yogi Adityanath and other BJP leaders, he has actively been campaigning here and drawing crowds.

Not only children but elders, too, throng to take selfies with Mahapatra wherever he campaigns.

“Seeing me, people gather for selfies and while they click photos, I give them my message,” Mahapatra tells PTI.

When asked about his plans, he says, “I am here till the elections are over. I will be leaving for Kaushambi, where I will campaign for Keshav Prasad Maurya (deputy chief minister) in the Sirathu Assembly seat). I will then go to Gorakhpur by foot to campaign for Yogi Adityanath.” While Sirathu in Kaushambi will go to polls in the fifth phase on February 27, elections to the Gorakhpur seat will be held in the sixth phase on March 3.

Explaining why he chose Uttar Pradesh, Mahapatra says it is the biggest state and is the heart of the country. “If the heart works properly, the entire body functions well. I want to ensure that Yogi becomes the chief minister again.” Post the Assembly elections, Mahapatra wants to travel to New Delhi on foot and meet the prime minister. “I have met senior leaders of the BJP. I even met the President, but could not meet Modi, my idol.”

On being asked why he dresses up like Gandhi, Mahapatra says he is working to fulfill Mahatma’s dreams, such as “Swachhata”.

“I have walked across seven states, including Kolkata, Rajasthan, Haryana, Gujarat and Punjab, to spread the message of cleanliness,” he says.

Previously, the then Union minister Rajyavardhan Singh Rathore had felicitated Mahapatra for ‘Longest Journey by Road as Mahatma Gandhi’ in Jaipur, Rajasthan.

A former student of Sangeet Mahavidyalaya in Odisha’s Bhubaneswar, Mahapatra had set out on his first padayatra from the Jagannath Temple in Odisha’s Puri on June 26, 2016.

Giving details about his family members, Mahapatra says his father passed away in 2018 and that his mother is “everything”.

He asserts that he does not take money from anyone and that he stays in temples and mutts.

His story will also be brought out as a movie titled ‘Silver Gandhi’.

“The movie is being directed by Avinash Nanda and will be dubbed in six languages,” Mahapatra says as he gets ready for his next campaign.