UP polls phase I: 15 illiterate candidates, 125 educated till Class 8 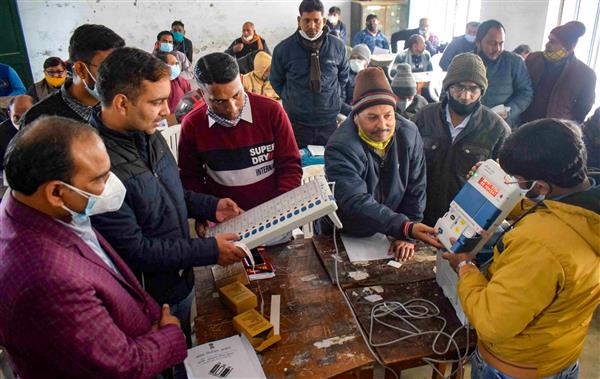 Polling officials take part in Electronic Voting Machine training for polling, ahead of the upcoming Uttar Pradesh Assembly elections at a training centre, in Prayagraj, on Feb 3, 2022. PTI

Among the candidates in fray for the first phase of Uttar Pradesh assembly elections, 125 are educated up till Class 8, while 15 have declared themselves to be “illiterate”, according to polls reform advocacy group ADR.

The Association for Democratic Reforms (ADR) also noted that there are more than 70 candidates in the fray who are aged above 60 years.

The ADR said it has analysed self-sworn affidavits of 615 candidates across political parties and independent nominees from the 58 assembly seats in 11 districts of UP where elections are scheduled on February 10.

There are 100 'graduate' candidates, 78 'graduate professionals', 108 'post graduate', 18 'doctorate', and seven 'diploma' holders, while 12 have not presented their education details, the ADR noted.

The 58 assembly constituencies going to polls during the first phase are in the districts of Agra, Aligarh, Baghpat, Bulandshahr, Gautam Buddh Nagar, Ghaziabad, Hapur, Mathura, Meerut, Muzaffarnagar, and Shamli.

Election results will be declared on March 10.