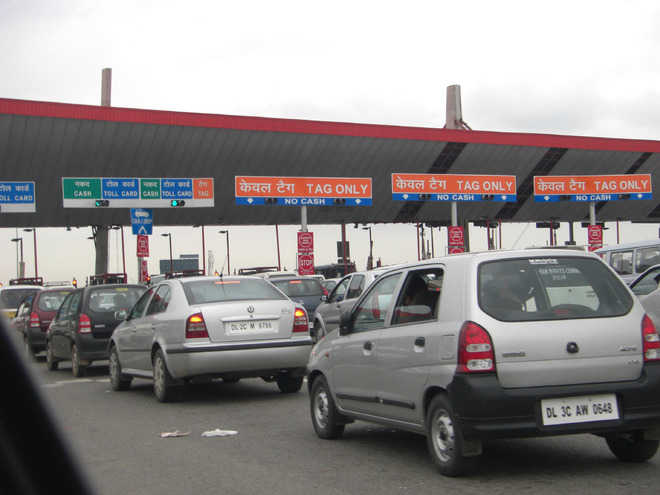 The hybrid lane will accept FASTag and other modes of payment. File photo

To avert inconvenience to citizens, the government on Saturday announced to convert up to 25 per cent of FASTag lanes at national highway toll plazas to hybrid lanes for a month.

The hybrid lane will accept FASTag and other modes of payment.

The government earlier had announced the rollout of mandatory FASTag under electronic toll collection from December 1, which was later extended to December 15, 2019.

“Considering the request of the NHAI and further the citizens are not put to inconvenience... it is decided that depending on the traffic pile up at high traffic volume fee plazas, not more than 25 per cent ‘FASTag lane of fee plaza’ may be temporarily converted to hybrid lanes,” the Ministry of Road Transport and Highways said.

This is to be considered on a case to case basis, it added.

“A daily evolution of such cases be made to take necessary corrective action,” it said.

It should be ensured that the least possible number of the declared FASTag lanes are converted into hybrid lanes and at least 75 per cent lanes of every fee plaza should remain operational as FASTag lanes, it added.

The ministry clarified that it is a temporary measure to be adopted for 30 days only to facilitate smooth flow of traffic so that no inconvenience is caused to the citizens.

The government had earlier extended the date to December 15 for making FASTag mandatory for toll payments on national highways.

The National Electronic Toll Collection (NETC) programme, the flagship initiative of the ministry, has been implemented on a pan-India basis in order to remove bottlenecks and ensure seamless movement of traffic and collection of user fee as per the notified rates, using passive radio frequency identification (RFID) technology.

After announcement of waiver of tag cost from November 21, there has been a growth in FASTag issuance.

To give a fillip to digital payments and bring in enhanced transparency, the ministry had directed to declare all lanes of fee plazas on National Highways as ‘FASTag lanes’ by December 1. However, one lane in each direction was decided to be kept as ‘hybrid lane’ which will accept FASTag and other modes of payment.

A customer may call on the helpline number ‘1033’ for any assistance related to FASTags, the ministry had said and added that they can also reach out to banks to obtain FASTags. PTI