UP govt says the Congress tried to pass on registration numbers of private cars, two and three-wheelers as that of buses 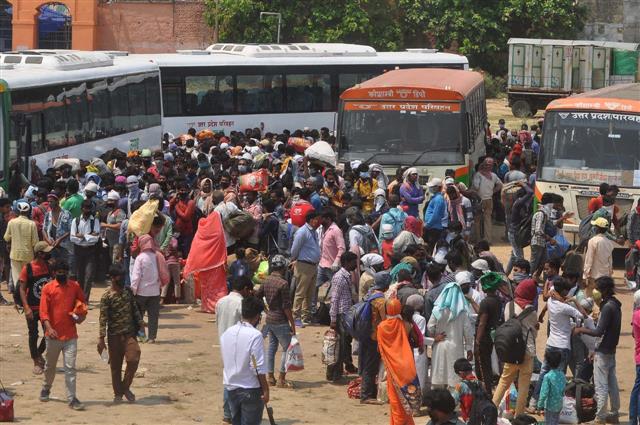 After a day-long high voltage drama, UPCC president Ajay Kumar ‘Lallu’ was arrested in Agra while an FIR was lodged against him and Congress President Priyanka Gandhi Vadra’s private secretary Sachin Singh in Lucknow for providing a ‘factually incorrect’ list of buses to the Uttar Pradesh government.

The confrontation between the Congress and the UP government over the 1,000 buses continues unabated.

Lallu was arrested as he and a large number of Congress workers had been squatting on the street at Uncha Nagla at Agra on the Rajasthan-UP border as the district administration was not permitting 500 Congress buses to enter Uttar Pradesh.

The 500 AICC buses were parked there ready to move towards Lucknow, but the police on duty wanted them to show special passes to proceed.

Hitting out at the Chief Minister Yogi-led government for wasting three days in “political play” while people were walking home, Congress general secretary Priyanka Gandhi Vadra, in a series of tweets, said: “If you wish you can run these buses under the BJP banner and may even paste your posters but don’t refuse our right to serve.”

“Now, even the UP government has admitted that after verification, 879 of the list of 1049  buses were found in order. For hours, 500 buses have been held up at Uncha Nagla border. On the Delhi border, another 300 buses have reached. Please let these 879 buses proceed.”

“Tomorrow, we will provide you a fresh list of 200 buses. Do verify that list as well. People are in pain and sad. We cannot delay any further,” said Priyanka in a tweet.

The 1,000 buses being provided by Congress General Secretary Priyanka Gandhi Vadra for the returning UP workers clearly appears to have become a victim of a bitter political tug of war between the Congress and the CM Yogi led BJP government in Lucknow.

In a day of swift developments, the CM Yogi-led BJP government launched a frontal attack on Congress General Secretary Priyanka Gandhi Vadra, Rahul Gandhi and Congress president Sonia Gandhi charging it of playing politics by passing on registration numbers of private cars, two and three-wheelers and good carriers as that of buses.

The first press conference on Tuesday was of the cabinet minister and government spokesperson Singh, in which they charged the Congress of a ‘farziwada’ (scam) as the list of buses provided by them includes registration numbers of two and three-wheelers, private vehicles as well as a goods carrier.

Singh alleged that the offer of 1,000 buses was a “political stunt” and demanded an explanation from Congress President Sonia Gandhi.

According to him, preliminary scrutiny of the list of registration numbers of buses provided by the Congress party on Monday had revealed a scam as it includes the registration number of goods carriers, private vehicles, two-wheelers and three-wheelers.

The minister said the registration numbers were being verified from the government of India portal.

Refusing to answer a question about how many of the 1,000 registration numbers were of other vehicles, he said that the exercise to verify them was still going.

Hitting out at the Congress, he alleged that the party was not concerned about the poor but only wanted to draw political mileage out of the whole issue.

Responding to a question if the UP government would accept the offer of 1,000 buses of the AICC, he said as a responsible government it was our duty to first verify all documents, licenses, fitness certificates before it takes a final decision.

In his third letter, addressed to Priyanka Gandhi Vadra’s private secretary, he had asked for the Ghaziabad buses to be parked at Kaushambi and Sahibabad bus stations and the 500 Noida buses at a ground near the Expo Mart.

The letter had pointed out that the concerned district magistrates would use the buses only after verifying the buses’ permits, fitness, insurance etc and drivers’ license and conductor’s papers.

This letter was part of the nightlong ping-pong match of letters between the ACS Awasthi and Gandhi-Vadra’s private secretary Sachin Singh.

After dilly-dallying for two days, on Monday evening, ACS Awasthi had responded to Priyanka’s letter of May 16 in which she had made the offer.

In his reply addressed to her private secretary Sandeep Singh, Awasthi referred to Priyanka Gandhi Vadra’s May 16 letter and accepted the offer requesting a list of the names and contact details of the drivers and conductors of the buses.

Within hours, Sandeep Singh responded to the letter by email in which he had attached the list of drivers and conductors as well as the registration number of the vehicles and had sought time to provide some additional details after re-verification.

The UP government is now claiming that many of these vehicles are in fact, registered as private vehicles, good carriers, two, and three-wheelers.

Singh had mentioned in his letter that he expected the UP government to put the buses in service by May 19 and make available the route of the buses and the timetable to the common people.

However, ACS Awasthi wrote another letter to Singh referring to Singh’s earlier email. This according to Singh was mailed to him at 11.40 pm on May 18, 2020.

In this second missive, Awasthi had also sought the fitness certificates of the buses, driver’s license, as well as full details of the conductors by 10 am along with the buses which were to reach Lucknow by 10 am.

By 10 am on May 19, Awasthi had wanted all buses at Vrindavan Yojana, Sector 15-16, Lucknow, handed over to the District Magistrate of Lucknow.

Responding to Awasthi’s second letter Singh in a letter written at 2.10 am on May 19, in which with due apologies Singh charged the move of being inspired by politics.

In his letter, Singh points out that the media was continuously showing that lakhs of workers are stranded at various borders of UP, especially in Delhi-UP’s border areas such as Ghaziabad and Noida.

“In a situation when thousands walked down to the UP border to get themselves registered at the centres,  taking 1000 empty buses to Lucknow is not just a waste of time and resources but the result of extreme inhumanness and the result of an anti-poor mind set,” he said in the letter.

Refusing to budge from the earlier stand of helping stranded workers reach their homes Singh once again requested for route map and timetable to run the buses from the Ghazipur border in Ghaziabad and Noida border.