While the AAP MLAs raise slogans demanding an independent probe into a six-year-old case against Lieutenant-Governor VK Saxena, the BJP leaders demand the sacking of ministers Manish Sisodia and Satyendar Jain over alleged corruption charges 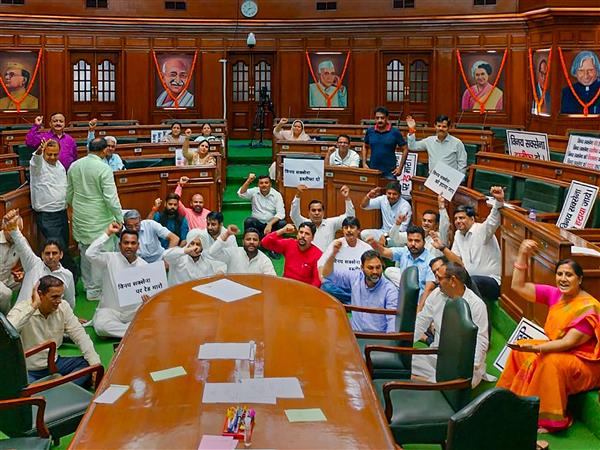 The Delhi Assembly witnessed ruckus on Tuesday with the proceedings adjourned twice amid sloganeering by AAP and BJP MLAs, who trooped into the Well of the House.

When the House met again at noon, Deputy Speaker Rakhi Birla adjourned the proceedings till 1pm amid uproar by legislators from both sides who came to the Well carrying placards.

While the AAP MLAs raised slogans demanding an independent probe into a six-year-old case against Lieutenant-Governor VK Saxena, the BJP leaders demanded the sacking of ministers Manish Sisodia and Satyendar Jain over alleged corruption charges.

The BJP MLAs also raised slogans against the Arvind Kejriwal-led Delhi government for “not allowing” a discussion on various issues in the House.

Earlier when the House met at 11am, both the ruling party MLAs and BJP legislators came into the Well of the House protesting over their respective issues forcing the Deputy Speaker to adjourn proceedings till noon.

The BJP MLAs were not part of the proceedings on Friday and Monday since they were marshalled out on both the days.

Accusing the Kejriwal government of using the Assembly to "abuse the Centre", the BJP MLAs said they would approach President Droupadi Murmu over the issue.

The Assembly proceedings were disrupted on Monday amid protests by AAP MLAs against Saxena.

The AAP has accused Saxena of pressing two of his subordinates to get demonetised currency notes worth Rs 1,400 crore exchanged during his term as the Khadi and Village Industries Commission chairman in 2016.